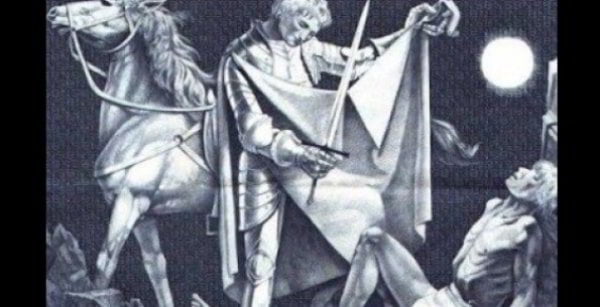 Initially a Roman solidier, he was baptized as an adult and went on to become a monk.

Quite the career side-step, though one that appeared to work out well for him.

Known as San Martin Caballero in Latin America because of his penchant for horse-riding, he’s also credited with promoting winemaking and introducing Chenin Blanc to the world.

It was this one bit of work that tipped the balance in Martin’s favour with “the Powers that Be”, and which ultimately secured his highly-coveted promotion to “Saint”.

And, like any good Saint, he has his own day: Martinmas.

On the eleventh minute of the eleventh hour of the eleventh day of the eleventh month of each year the Feast of Saint Martin celebrates harvest-time, when newly-produced wine is ready for drinking and when winter preparations have come to an end. It also, traditionally, occurs the night before the beginning of the 40 day penitential fast “Quadragesima Sancti Martini” (or “Advent”).

While the subsequent fasting is optional, we’ve taken the liberty of finding you a feast to attend on the evening of 11.11.11: a sumptuous banquet and party at the Old Boy’s Club.

Your evening will begin with oysters and black velvet cocktails in a secret subterranean vault, continuing with a traditional St.Martin’s Day lantern procession to the Old Boys’ Club.

The after-party – complete with cocktail bar, live music and DJs – will run until 3am.

Like alternative experiences and quirky entertainment? Check out our guide to the very best of what’s on in London this month.