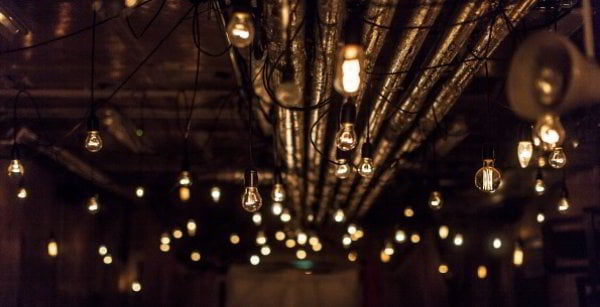 A useless – yet, if you remember it, impressive – nugget of information to share with whomever you decide to take along to the world exclusive of Grimm Tales: an immersive theatrical reinterpretation of six Brothers Grimm fairytales being performed over five floors of a converted gallery space beside the Oxo Tower from now until 15th February 2015.

If you decide to go then your evening will commence with the perusing, picking and sampling of a selection of Grimm-inspired beverages from the brothers’ pop-up bar, before continuing into the first of six fairytale rooms which, collectively, contain over 1,500 light globes; 160 tea chests; 6,000 square feet of netting; 500 picture frames; 800 brass trinkets; and 200 apple crates.

As you wander through the subversive world of the Brothers Grimm you’ll experience their tales from every angle, being fully immersed as – for example – an exquisite princess cuts a deal with an ambiguously amphibious Frog King, and innocent children unwittingly make their way to the confectionary-covered abode of a cannibalistic old hag. Basically it’s just like reading these infamous tales in a book, only here the characters will be trailing your footsteps and breathing down your neck.

And then, it’ll be over…

… freeing you up to roam the five floors of expertly-curated set design, tackle netted forests and cozy up in dark, debaucherous corners before heading even further upstairs to the Oxo Tower’s glass-walled, top floor bar for a riverside nightcap with panoramic views of London.

Which is how every immersive, theatrical reinterpretation of The Grimm Tales inside a converted Thameside gallery space should end.

NOTE: After its critically-acclaimed run in East London earlier this year, The Grimm Tales is appearing in this brand new production at the OXO Tower only until 15th February 2015.

Enjoy pop-up experiences? Check out The Nudge’s guide to the best pop-up’s in London.