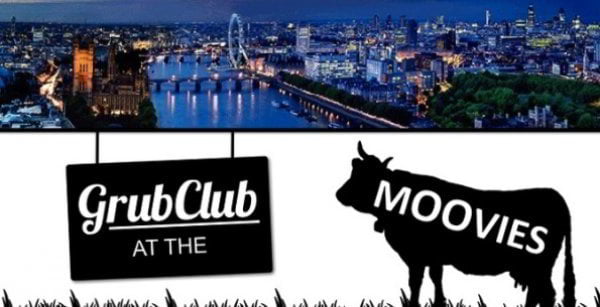 Jim Apple finds introducing himself to be highly problematic, while holidaying in France.

His predicament’s a good, if tenuous, reminder of how important names can be.

Take “Grub Club Presents The Pig Lebowski, The Last Of The Burritos & Fried And Loathing In Las Vegas” as an example.

That’s a good name, for 2 reasons:

1. It includes the hosts’ name, Grub Club, which immediately assures you that whatever these people have planned, food’s going to be at the heart of it. Which is good news, because you like food.

2. Its flirty wordplay combines indications of what may be on the menu with the names of some of the greatest films of all time. Films which, you’ll have already correctly assumed, will also be on the menu.

What it doesn’t tell you, however, is that these three immersive cinematic/foodie experiences are happening at Skyloft, where your £25 ticket price won’t only include dinner and a private film screening but also panoramic views of London and – depending on the night you attend – free cocktails; decorative bowling alleys; casinos; and lookalikes.

The food comes courtesy of The Wandering Chef, who will be completely undermining his own brand by cooking in the same place more than once (on 27th July, 10th August & 24th August). At The Pig Lebowski he’ll be serving up chipotle-glazed ribs and hotdogs with mac n’ cheese; at Fries & Loathing in Las Vegas it’ll be burgers and spicy-fried chicken with rainbow summer ‘slaw; and, for The Last of the Burritos, chipotle pork belly, pulled bison with corn mash, and quesadillas with avocado.