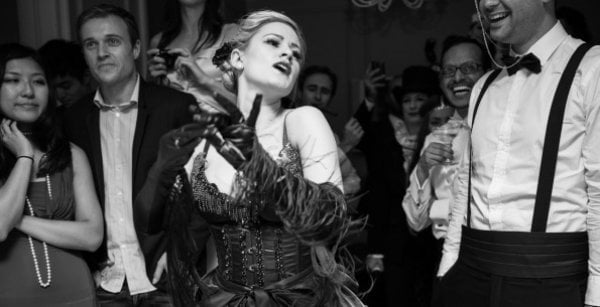 Wall Street’s crashed and the Great Depression is looming; America – having propped up the German economy after a painful period of hyperinflation – needs its money back, quickly.  With none to give, German companies will soon begin to go bankrupt, rendering millions of young men unemployed who – hungry and desperate – will then turn to Adolf Hitler and the Nazi Party for a solution to their woes.

But in the meantime everyone’s still getting pissed on absinthe, visiting filthy sex shows, dancing on tables, and generally living it up like they’re in a scene from “Cabaret”.

Which is, by a surprising twist of fate, almost exactly the same scene that you’ll stumble across if you attend Herr Kettner’s Kabaret in Soho on the 28th September.

Described as “a night of glamorous hedonism inspired by the decadence and debauchery of Weimer Germany” and set over 2 floors of a Georgian townhouse in Soho, Herr Kettner’s Ballroom will host the Shirt Tail Stompers jazz six-piece, with complimentary swing dance lessons, and vintage DJing from Swingin’ Dickie.

Sophia St.Villier’ll be ticking the burlesque box in the Kabaret Lounge and, on the off chance that you want more, you’ll also find ukele players, tap-dancers, comics and magicians in the Absinthe Lounge.

So you’ll probably want to base yourself in there.

Given how much you love magicians.

Enjoy discovering quirky nightlife in the city? Check out our guide to the best of what’s on in London.