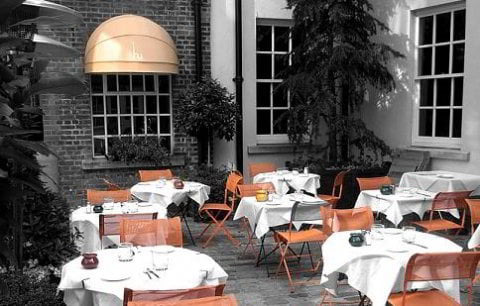 The novelty and pleasure of an al fresco film screening is very often accompanied by thousands of supposedly “like-minded” revellers getting in your way; undesirable food; chilblains; uncomfortable seating (usually the ground) and, most unhappily of all, portaloos.

While none of these issues have hindered the growing popularity of outdoor film screenings, it would on occasion be nice to enjoy a film outside whilst also remaining warm, comfortably seated and well fed.

Fortunately Mayfair’s Hush has gallantly come to the rescue, having just announced a season of classic film screenings in their secluded courtyard.  A different film will be shown at 19:30 each Saturday night from 29th October up until 17th December.

Highlights include the Godfather Part 1 on 5th November and Breakfast at Tiffany’s on the 19th; A Streetcar Named Desire on the 26th November and – ramping up to Christmas – Love Actually on 10th December and It’s A Wonderful Life on the 17th.

There’s no ticket price for these screenings, though there is a £1.50 cover charge.

Winter Warmer cocktails, a selection of popcorns and the full Hush A La Carte menu will be on offer, as will some cosy blanket/poncho creations that Hush have had specially designed to keep their guests warm throughout the film (in addition to several courtyard heaters).

To make a reservation online just quote the name of the film and “screening”, or for full film listings and reservations either call reception on 020 7659 1500 or email info@hush.co.uk

Like quirky experiences and alternative entertainment? Check out our guide to the very best of what’s on in London.