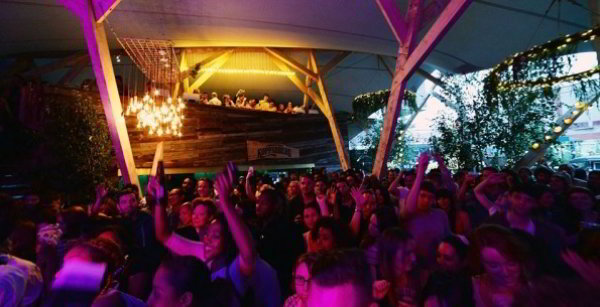 If there’s one thing that London car parks are useful for during the summer months, it’s providing a place for people to park their cars.

The ultimate collision of cultures – with the earthy serenity of a Swedish forest in one corner, and an East London car park in the other – Kopparberg Urban Forest will be combining live music, street art, food and drinks for five whole weeks, starting from next Wednesday 2nd July 2014.

And it’s completely free to visit.

Taking centre stage is a bespoke woodland bar; live music courtesy of several established Scandinavian musicians and many of the UK’s top festival acts; plus nightly DJs and graffiti from London’s local street artists. And, in addition to all of that, you’ll find several of East London’s finest street food eateries (like Buffalo Joe’s, Mama’s Jerk Station and Brick Lane’s Swedish Bar and Kitchen, Fika) and liquid refreshment in the form of cocktails and Kopparberg’s premium fruit ciders, alongside their rarely-seen selection of beers… all of which will effortlessly combine to gift you a memorable evening under the stars.

Because there’s nowhere to park.

NOTE: Kopparberg’s Urban Forest is open from 12pm until late (Thurs – Sun) between 2nd July and 3rd August 2014, and is free to enter for anyone over the age of 18. To learn more, and to find out which bands are performing (from 6pm, every night) check out their website HERE

ALSO NOTE: Arriving early is advisable, as admission is on a first come first served basis.