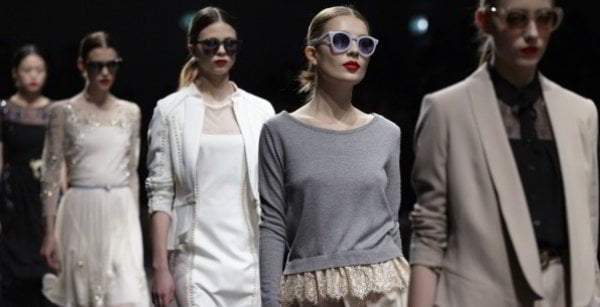 At least it used to be, until we decided to go ahead and reserve you a seat between Alexa Chung and Anna Wintour in the front row of the Mulberry Show on the 17th September!

What we have done, however, is uncover a portal into their world: a post-London Fashion Week beehive of trendsetting à-la-mode-ishness at Somerset House, known to those in the fashion industry (and to everybody else) as Vodafone London Fashion Weekend.

Think of this as an opportunity to either tentatively dip your toe in to the world of fashion, or completely submerge yourself in it. Because from the 19th – 22nd September, Somerset House will be giving you access to exclusive offers from over fifty designers: from Joseph, Splendid Paige Denim and French Sole to Wishlist, Pringle Of Scotland and Yolke, as well as presenting talks by fashion editors, stylists and leading trend experts in the Vodafone Lounge.

There’ll also be catwalk shows (by designers like Giles Deacon, Julien Macdonald, PPQ, Ashish and Holly Fulton) being hosted in the official British Fashion Council Show Space, offering an exclusive insight into the up and coming designer trends for this autumn/winter season…

Hopefully woolly hats and scarves will be in again this year.

NOTE: Vodafone London Fashion Weekend is taking place from the 19th to the 22nd  September at Somerset House. Tickets cost from £16-£130. For more information or to book tickets visit the website, or keep up to date on Twitter via @LFWEnd.