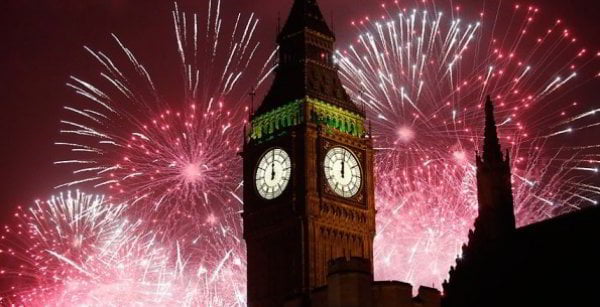 Our New Year’s resolution is to save up enough money to buy a Velcro wall.

And we plan on sticking to it.

But before getting started we must first ensure that you’re teeing yourself up for total ‘New Year Resolutions’ success in the most time-tested manner possible: by doing as much of everything that you’re resolving not to in 2014 on the 31st December.  And obviously that has to be somewhere fun, because not exercising, not learning a new language and not abstaining from large quantities of booze while sitting at home in your pants doesn’t count.

Highlights in London this New Year include StreetFeastNYE, an epic celebration of street food, drinks and music at indoor night market Hawker House where – for one night only – they’ll be wheeling out a champagne bar, a jazz band and DJs who’ll play until 3am; NYE at The White Mansion, which promises to combine fire shows with silhouette artists in a “stunning and unusual private venue” in London; plus Forza Win bringing a never-ending pizza buffet, live music and dancing to their East London pickle factory.

Other options include the ultimate NYE Dinner Dance courtesy of Disappearing Dining Club; live DJs, free ping pong and night-long canapés at table tennis / cocktailing mecca Bounce; becoming immersed in an illicit and glamorous world of live jazz and cabaret at a private party in Shanghai, courtesy of UFF Tea; or heading along either to Bourne & Hollingsworth’s huge Blitz Party (for a night of 1940s glamour inside a sprawling air raid shelter) or to their equally huge Dark Circus Party (if you prefer the idea of racier costumes, potent cocktails and live performances courtesy of Torture Garden.)

And then there’s obviously London’s NYE Fireworks, which you can pretty much watch from anywhere.

Note: This year is also the 25th anniversary of London’s New Year’s Day Parade: it starts by the Ritz (Green Park Tube) at 12pm on 1st January 2014.

Enjoy alternative and unusual events? Check out our guide to the very best of what’s on in London this month.

All Over, Central London,