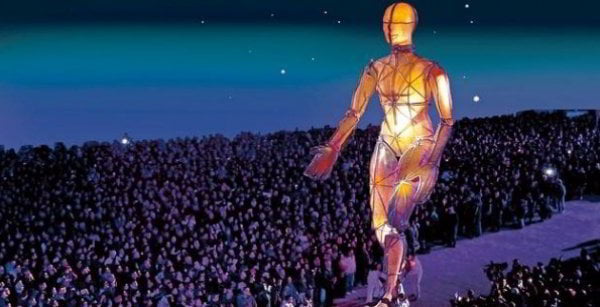 TASTE vs GDIF | They’re Not Going Toe To Toe

You could say that Taste is going head to head with the Greenwich & Docklands International Festival this weekend.

Only you’d be wrong.

Because while both are happening this weekend – literally, happening – one’s an epic 4-day celebration of the London restaurant scene, while the other is London’s largest outpouring of entirely free outdoor theatre (which The Guardian once described as being an event “whose annual contribution to the happiness of the people of London is unrivalled”).

And so given their differences, you should probably just go to both.

Regarding Taste, it’s been said that there’s only one thing better than attending the 10th Anniversary Year of this four-day foodie fiesta in Regent’s Park including – as it does – restaurants like Sushisamba, Le Gavroche and Tamarind; world class chefs like Raymond Blanc and Michel Roux Jr; and a ‘Taste Theatre’ overflowing with interactive cooking demonstrations.

And that’s getting tickets for 20% less than anybody else (which you can do by using our code, SRA40, on Taste’s website).

Then there’s the punchily-monikered, and totally gratis, “Greenwich & Docklands International Festival”, which – even after it’s been abbreviated to GDIF – promises to be way more fun than it sounds.

It starts this Friday evening at 10pm with an epic “real life disaster movie in the sky” courtesy of the Wired Ariel Theatre, continues all weekend with the “European style festival mayhem” of the Greenwich and Island Fairs (featuring outdoor theatre, dance, circus, games and sideshows) and finishes up with “One Million”, a live music video / aerial spectacular in Royal Artillery Square on Saturday 29th June.

Which goes to prove that even in London, once in a while, the best things in life truly are free…

You can get 20% off tickets to Taste in Regent’s Park this weekend with our code SRA40, and there are full (and extensive) listings of what’s going on at GDIF this weekend and beyond HERE.