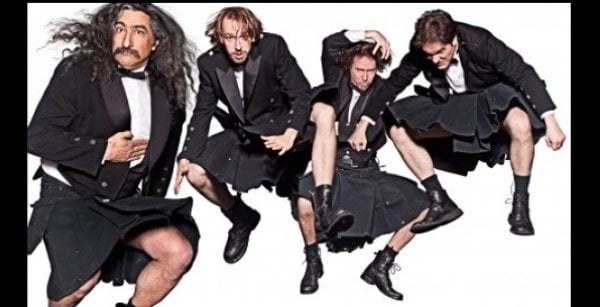 “Kilt wearing, flame throwing, line dancing, ballet dancing, tongue twisting, piano playing anarchists, these boys put the Y in wild, the K in chaotic and the OMG (or the WTF) in live comedy”.

The four Flying Karamazov Brothers (Alexei, Pavel, Dmitri and Zossima) are neither brothers, nor can they fly. But there are four of them. And they’re on a bit of a roll, returning to the UK after 17 years following a highly-acclaimed off-Broadway run.

A unique quartet of kilt-wearing, moustachioed comedians, philosophers, acrobats and jugglers offering up “a raucous blend of linguistic and physical stunts”, their show is suitable for any and all of the following:

“Adults, students, television personalities, hoodies, disgraced politicians, politicians who have yet to be disgraced, bank managers, children (but only the smartest, most serious ones), landed gentry, crash landed gentry, nerds, birds, pseudo-intellectuals, Martians, musicians and other animals”.

Taking up residence at the Vaudeville theatre on the Strand this summer, nestled away amongst the many musicals and plays on offer in the West End, the Brothers offer you something different: an escape from the mundane, and a brief respite from normal life.

Because they’re anything but normal.

Note: THIS SHOW IS ILLEGAL IN SOME COUNTRIES. Buy tickets here.