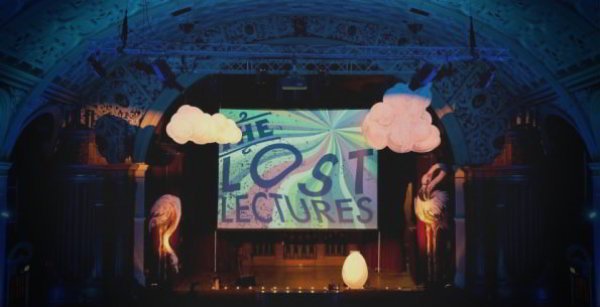 The Lost Lectures | A Secret Location

We had a long chat and, to summarise, it’s been feeling rather unloved of late so is wondering whether you might let it stretch its legs a little? You know, by exposing it to a few ideas that are unrelated to your work, family and friends.

Ideally at some point within the next week.

If you decide to indulge it – and we’ll assume that you’re aware of how slippery a slope that can be – then you should know that The Lost Lectures returns next week, bringing with it several hard-hitting rounds of dinner party conversation starters for you to digest… and then ultimately pass off as your own. Coming to a secret London location on 22nd and 23rd November this is set to be Lost’s biggest event yet, featuring a selection of short talks each night from an eclectic assemblage of exactly the sort of lecturers that you won’t find in universities anywhere…

In addition to chessboxing bouts and a performance by international beatboxing star Reeps One (it’s a boxing theme) there’ll be bars and live music; street food; a fake bookies; roaming cockney popcorn vendors and talks by speakers like tweeting feminist Caroline Criado-Perez, pickpocket extraordinaire James Freedman, mosquito hunter Hadyn Parry and Ruby Wax – a lady who needs no introduction, so doesn’t get one.

Could you ask your intellectual curiosity to stop calling now?

We’ve done all we can.

NOTE: The Lost Lectures is being held in a large, secret London location on both the 22nd and the 23rd November. To learn more about the concept behind the lectures and to buy tickets (which you can get at the now sold out “earlybird” rate by using promotional code nudgeme) check out the Lost Lectures Website.

Enjoy alternative and unusual events? Check out our guide to the very best of what’s on in London.

A Secret Location, The City and East London,