A museum that’s clearly as fond of collecting words as it is objects, the Upminster Tithe Barn Museum of Nostalgia is every bit the eccentric, quirky London museum that it sounds.

As the sharp-minded will immediately observe, it’s in Upminster – which yes is far from most of London, but is, unfortunately, just where this particular tithe barn happens to have been standing for the best part of six centuries.

Lying on the old manor estate of Upminster Hall, once home to the Abbey of Waltham and later gifted to Thomas Cromwell (who was then gifted an execution a few months afterwards), the barn was built back in 1450. It was kept as a farm storage building right up until the 1970s. As the agricultural industry started changing rapidly, it was decided the barn would become a museum to the old ways of farming. 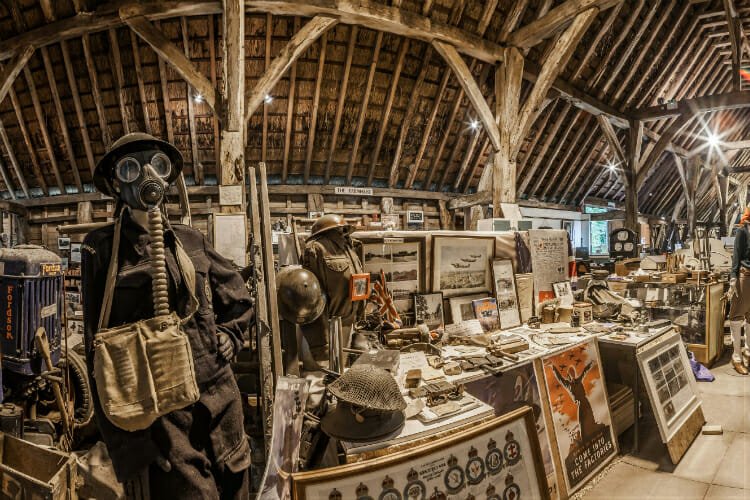 Over the following decades, however, it began to gather more and more bric-a-brac, from early computers to old gas masks and domestic bric-a-brac. The result is an Aladdin’s cave of eclectic, everyday treasures collected over several lifetimes.

There are no glass cases, no display notes; everything is piled up in precarious stacks or propped up in corners quietly gathering dust. There’s wartime ration books and propaganda posters; eighty-year old tea tins; record players and gramophones; old pub signs; vintage toys; spinning wheels and something from the 40s called a ‘blood circulator’. Like an old attic, it’s a tribute to the everyday objects that make up the fabric of human life – from the deeply treasured to the merely functional.

But unlike an old attic, it also holds a tractor.

NOTE: The Upminster Tithe Barn Museum of Nostalgia is open for a few days every month. To see upcoming dates, take a look at their website HERE.

Like quirky collections? Peruse our pick of unusual museums in London