For those unfamiliar with Wimbledon, the whole area seems to revolve around one single centre of gravity.

It’s not the tennis courts.

It’s not the Common.

It’s the complex that represents both its its shopping centre and its main train station. And now, sitting proudly on the top deck of all of it is 601 Queens Road. It comes to us from the people at Darwin & Wallace, who really like addresses, and are also behind the fine establishments at No. 32 Old Town, No. 197 Chiswick Fire Station and No. 11 Pimlico Road.

Given that the spot they’ve picked out has essentially elevated (pun very much intended) the place to instant restaurant royalty, you’ll be glad to know that the space itself is appropriately majestic: it’s covered with a vast, well-lit dome which is mirrored by a circular bar beneath it, with a terrace spilling out on one side, and a more private wood-floored interior space on the other. 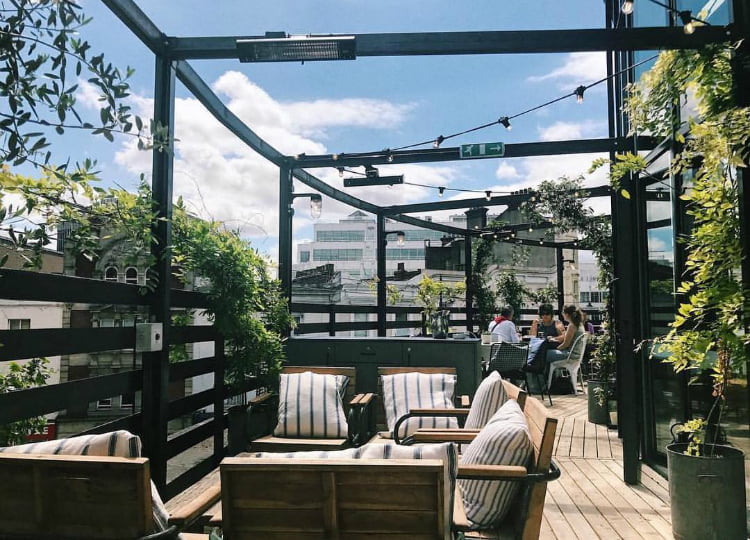 Here’s what you can expect from the menus:

They’re open from breakfast, where you can get a mix of traditional British goods (including a Full English, a bacon sandwich with a huge roasted Portobello, or some smoked salmon & scrambleds) alongside some more exotic numbers: witness their breakfast rice bowl, filled with sticky kimchi, poached egg, and avocado.

Washing it all down, there’s a lineup of almost a dozen beers/ales/ciders to go with their globe-spanning wines, and the thing that we all came here for: cocktails. As well as a strong lineup of classics, they also have house originals, such as ir Apricot Ice Tea (made with vodka, Ear Grey, and apricot puree); their Matcha Martini (with matcha, honey, and basil) and the standout Watermelon Frozé – a blended combo of rosé, watermelon, and agave.

And, just not just because it’s Wimbledon…

…they have a pretty good service game, too.

NOTE: 601 Queen’s Road is open for breakfast, lunch, and dinner, all week long. You can find out more, and make a booking at their website right HERE.