The starched white linens. The impeccable yet somehow un-snooty service. The colourful little dishes that seem to double as ephemeral works of art, so beautiful that you almost feel guilty about eating them. Almost.

Well, Alex Dilling at Hotel Cafe Royal is that restaurant.

Only, it’s not in France. It is, as you might have intuited, in the Hotel Cafe Royal. Which is, if you know it, on Piccadilly. It’s a haven of old school grandeur (Oscar Wilde used to practically live there, and everyone from Churchill to Muhammed Ali to Harry Styles have popped in), and after a recent restoration it’s been been given a glossy, marble-coated facelift. Head to the first floor via the pleasingly old fashioned elevator (with a mechanical dial and everything), and you’ll find Alex Dilling’s restaurant tucked away in a corner.

Walking in, you’ll first find a glass wine wall lined with what we presume is a galactially expensive stockpile of bottles – but peering beyond them and through the glass, you can see the kitchen itself, where a team of chefs in unblemished white uniforms move with military accuracy, all marshalled by the man himself: Alex Dilling. 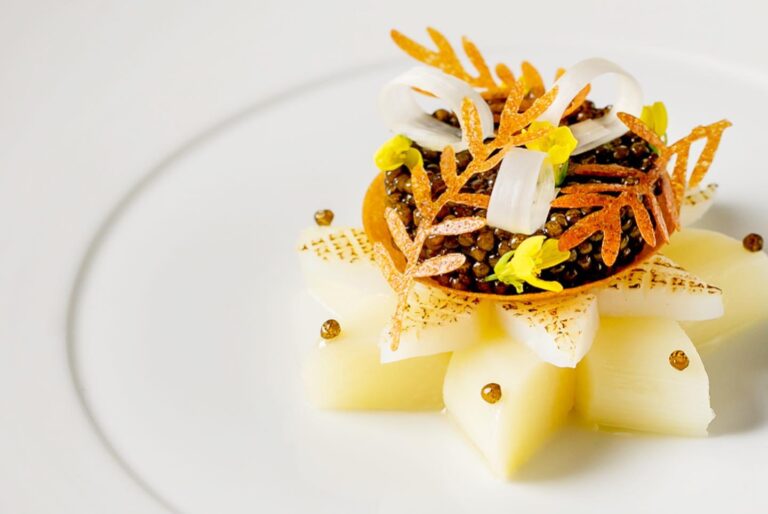 Now, it’s at this point that we should take a moment to talk about Mister Dilling. Because the long and short of it is, the man practically bleeds Michelin Stars. Ten years ago, Dilling was Chef De Cuisine at New York’s Caviar Russe, helping them to snare their first Michelin star. He then moved over to our sunny shores, taking the reigns first at Mayfair’s Two Michelin-starred Hélène Darroze at the Connaught, and then at the Two Star stalwart The Greenhouse. And now he has his own name on the door, he hasn’t exactly decided to let the standards slip. In fact, as his Head Chef he’s picked his right hand man at The Greenhouse, Pierre Minotti (also a maestro in the kitchen).

Now back to the space itself. The whole place is dressed in shades of white & grey, with floor-to-ceiling windows looking out over the slow curve of Regent Street. Light, unobtrusive jazz plays softly in the background. It’s tasting menu only here, so your host will just ask you about the wine. And then comes the parade of extraordinary dishes…

Alex Dilling appears to be genuinely chasing perfection, and this restaurant is the arena in which he intends to capture it.

NOTE: Alex Dilling Café Royal is open now, Tuesday-Saturday. You can find out more, and make a booking, HERE.

Like yourself some French food? You’ll find a guide to London’s best French restaurants here.