It seems like only yesterday they had only five.

This time around they’ve decided to let their fluffy, steamed buns step out of the spotlight, making way for this – a Taiwanese noodle shop in Shoreditch with a karaoke bar underneath it.

It certainly looks the part, with lots of wood & white tile overlooked by sculpted paper lampshades and a large skylight to help flood the place with sunshine. It’s a clean, modern take on the midcentury look, yet like their other venues it hits the proverbial nail on the head, with an intimate karaoke room downstairs powered by the classic East Asian Karaoke-TV system. If you’re unfamiliar with Taiwanese cuisine, beef noodle soup’s something of a national dish. Even more so than bao. Here, it comes in two varieties: a classic Taipei-style broth with slow braised beef cheek and beef shortrib, spiced beef butter and fermented greens, which hit the rich, hearty, and nourishing notes. Then there’s the lighter Tainan-style broth, made with imported 400 day-aged white soy and thin slices of rare poached rump cap “for diners who like to drink from the bowl”. The noodles for both are made in-house each morning, using wheat from Taiwan itself to give them juuuust the right amount of bounce. 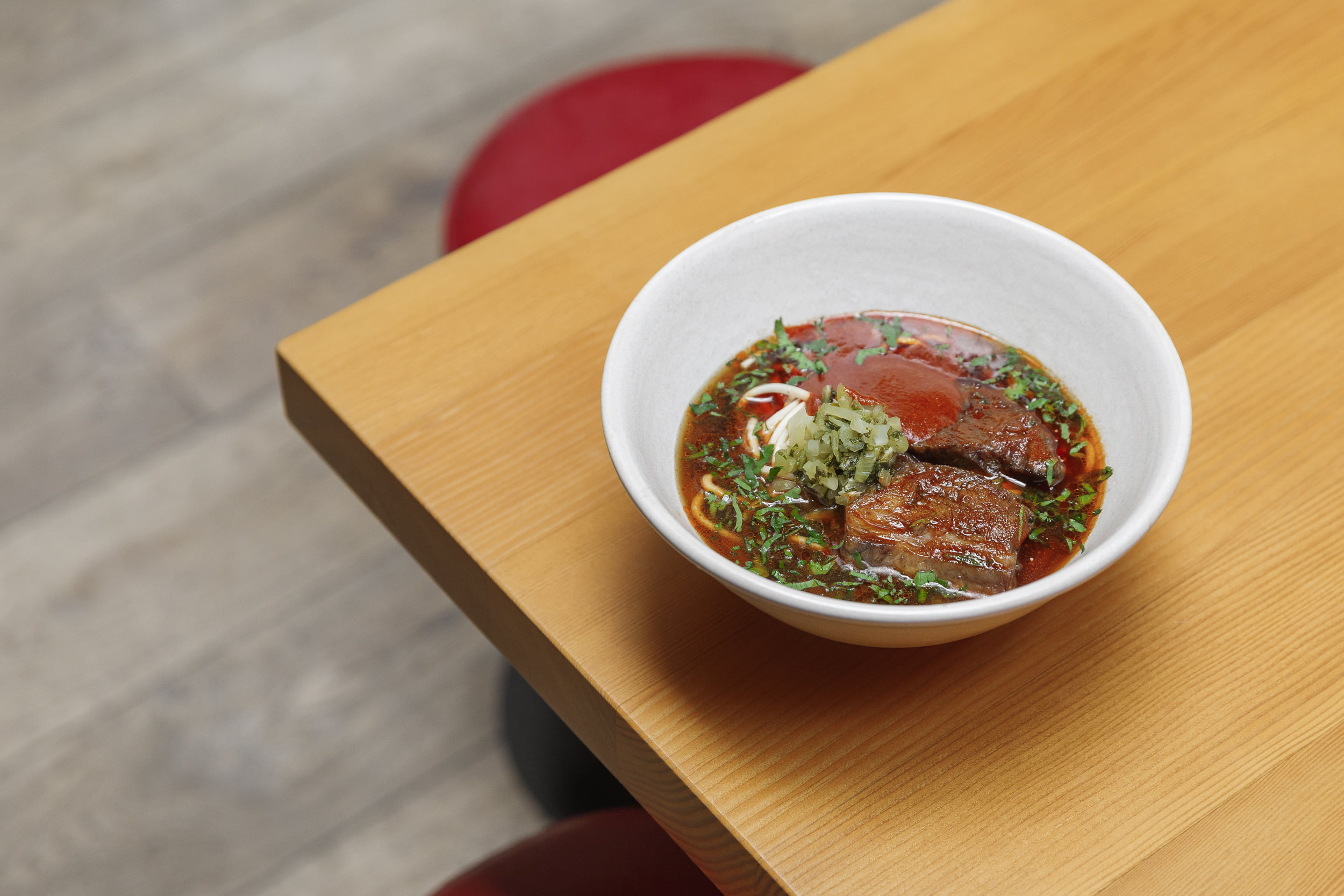 For those concerned about the bao bun situation, fear not: there are a couple available as starters, including an Iberico pork number with black garlic sauce, and a panko shrimp croquette with sweet & sour. There’s other stuff too, from crispy tripe, to eel & smacked cucumber, to fried Ogleshield cheese rolls. And for dessert? Well if you’ve never tried shaved ice, now’s your chance: there’s strawberry cheesecake & tiramisu versions to pick from.

Finally, the drinks. Taiwanese cocktails are the order of the day, with shaved ice making a surprise re-appearance in the form of a Midori Whisky Sour Ice, and a Grape Sake Ice, alongside some more cube-chilled numbers like the Umeshu Negroni or the Milk Tea Old Fashioned. And they’ve even lined up something called a Calpis Fizz, which they tell us is inspired by Calpico, “the Asian yoghurt soda”.  Yes, yoghurt soda.

NOTE: BAO Noodle Shop is now open. You can find out more and make reservations at their website right HERE (though they also keep a percentage of their tables free for walk ins).

Ever wondered what BAO would give you for breakfast? Wonder no more…