It was world-famous Spanish hobbit Bilbao Baggins who once said,

Well, it was either him or Pablo Picasso.

Irrespective, if there are two men who can never be accused of failing to take action (love a double negative!) it’s The Hart brothers, who appear to be slowly taking over London Bridge. Because first the men at the head of the critically lauded and publicly adored Barrafina empire opened the doors to their new Mexican eatery El Pastor; then more recently they unveiled the second branch of their al fresco DIY BBQ restaurant Parrillan in the new Borough Yards development (literally right by Borough Market) before even more recently cutting the rope on Bar Daskal, a brand new sherry bar in the same location inspired by their grandfather. And now – putting the cherry on top of their London Bridge cake – they’ve opened their fifth Barrafina, which is not only also in Borough Yards… but in the same building as Parrillan and Bar Daskal (you can actually walk around inside between all three).

As with its siblings, the menu at Barrafina Borough Yards has been assembled by the group’s exceptionally talented Chef Director, Angel Zapata Martin (who has 1) Drawn inspiration from Balearic, Catalan and Mediterranean-Spanish cuisines in order to add a couple of new, Borough Yards-specific dishes to his roster of established hits, and who 2) Once told us all about his favourite places in London). 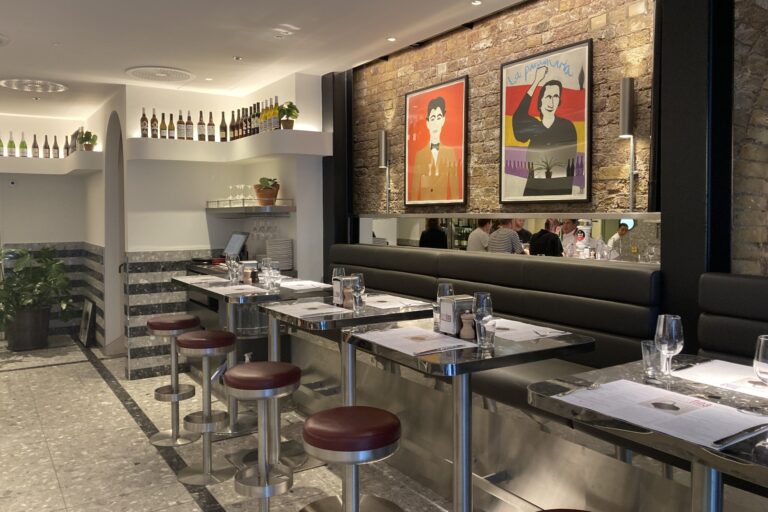 Some of Angel’s dishes here include torreznos, a crispy, fried bacon snack; ensalada payesa, a sort of Balearic panzanella; plenty of cured meats and spreads plucked from across the islands; a rich Catalan chicken dish simmered in sherry and dried fruits; Mallorcan dirty rice; and fried Catalan doughnuts to finish.

But what about the interiors, you ask. And it’s just as well you do, because the team have stuck to their tried and tested formula of Barrafina’s now iconic marble-topped counter wrapped around an open kitchen, where you can perch to watch the chefs (led by Brindisa’s Fabiola Bonacci) at work, all while sipping on a Galician beer, a Pedro Ximenez sherry… or your very own bottle of Gramona Imperial 2016 Cava.

As ol’ Bilbao likes to say,

“A beber y a tragar, que el mundo se va a acabar…”
(Eat, drink and be merry, for tomorrow we die).

Like keeping up with the latest news? Check out our guide to London restaurants opening soon