They often get skewered.

But Berenjak Soho is part of the new wave of shish-based restaurants (spearheaded by the likes of Le Bab & Bababoom) hoping to give the proteinous treats the platform they deserve, and bringing a more authentic, less Westernised flavour back to the dish.

In this case, it comes to us from chef Kian Samyani, who previously manned the pans at two of the best Indian restaurants in London, Brigadiers and Michelin-starred Gymkhana (and in fact, this place is opened with backing from their founders, the Sethi siblings). At Berenjak Soho, he’s drawing on the Iranian home cooking he grew up on, as well as the recipes of Tehran hole-in-the-wall kabab vendors. 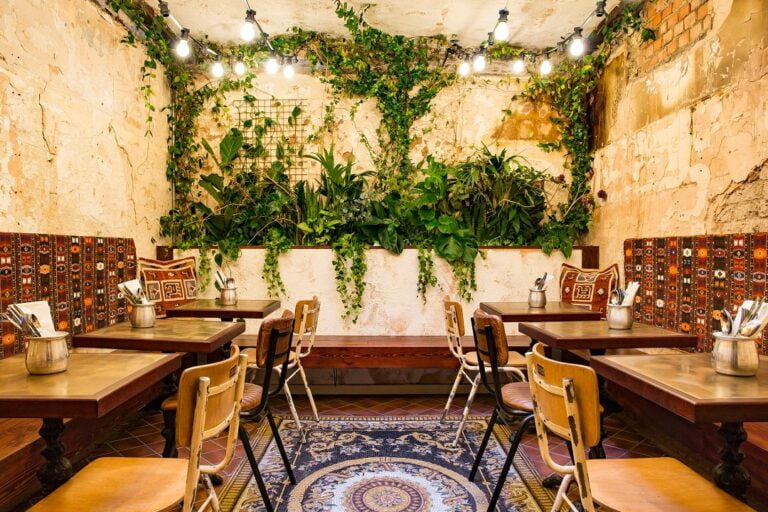 Have a look about inside and you’ll be pleased to note that the hole-in-the-wall inspiration has not extended to the space itself, which evokes a creative mash-up of traditional and modern styles: stripped plaster & exposed brick rub shoulders with Persian rugs and stained glass windows. Berenjak Soho has a rich, earthy colour palette, and it all seems very well lived-in – there’s even a plant-covered wall at the back of the dining space that almost appears to have its greenery growing out behind the very plasterwork itself. 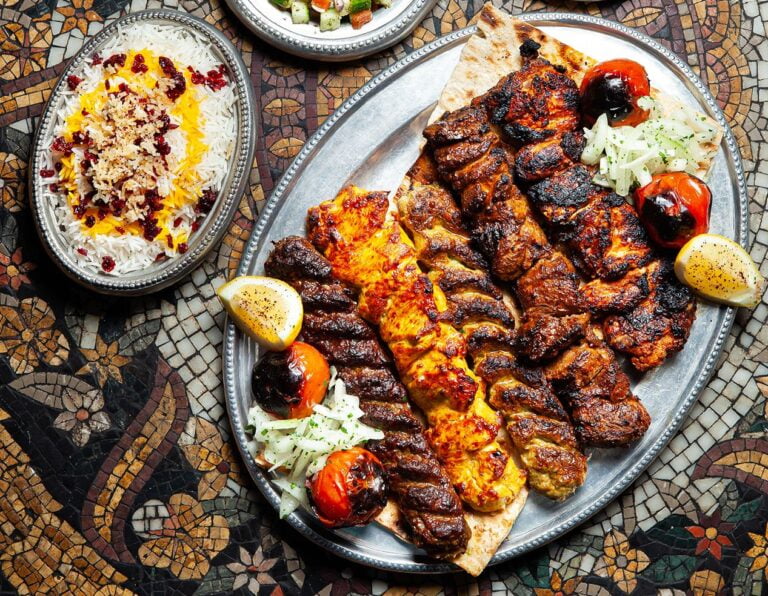 Behind the long open kitchen you can see the chefs tending to their toys: the grills, rotisseries, and tandoors that Berenjak Soho owes its authentic flavours to. Served up on the counter you’ll see appetite whetters like their clay-baked seeded sourdough flatbread; coal-cooked aubergine with whey, walnuts, and dried mint; or some black chickpea hummus with sumac.

The kebabs themselves include inventive numbers like mangal grilled liver with sweetbread, but if you’re in the market for something a little less off-piste, then you can always go for some equally tasty lamb rump marinaded in chilli, tarragon, and yoghurt; or good ol’ chicken breast with lemon & saffron. Away from the kebabs and onto the Khoresht (basically an Iranian stew), the other main, these come in two soul-soothing varieties (lamb or aubergine) and are heartily spruced up with beans, dried lime and herbs. And dessert? Yeah, you’re gonna want that too. They’ve mercifully spared you from choice, so its just the one – a Darlish baklava ice cream sandwich consisting of a grand scoop of vanilla ice cream sitting pretty in the middle of a sticky layers of pistachio pastry.

Because alcohol is more or less illegal in Iran, Berenjak Soho serves the local favourite ‘sharbat’; a chilled cordial served with sparkling water & swizzled with fresh herbs. And because alcohol is more or less compulsory in the UK, they’re spiking those sharbats with booze, meaning you can get preserved lemon with parsley (plus optional vodka & bergamot); black lime with mint (gin & apricot); blackcurrant with honey (cherry & tequila); and more.

For wine, Berenjak Soho has sourced an intriguing selection of bottles from Lebanon, Macedonia and Armenia, and the cocktails, meanwhile, are mostly classics given a little personal tweak as with an amber Negroni (it’s got amber wine in it) and a tahini old fashioned made with a sesame seed bourbon and wild flower honey.

ALSO NOTE: After the success of their Soho site, Berenjak Borough opened, and let’s just say it’s a real looker…

Keen on the area? Then you might want to check out our guide to the best restaurants in Soho.