They say the third time’s the charm.

But in the case of the Roux family, the first and second times were also the charm.

After all, Michel Roux opened the UK’s first three Michelin Star restaurant (and another Three Star joint after that one) and his nephew Michel Roux Jr is one of the nation’s most beloved celebrity chefs.

Now the third generation has entered the game in the form of Emily Roux, who’s opened her own restaurant in Notting Hill, with husband Diego Ferrari. 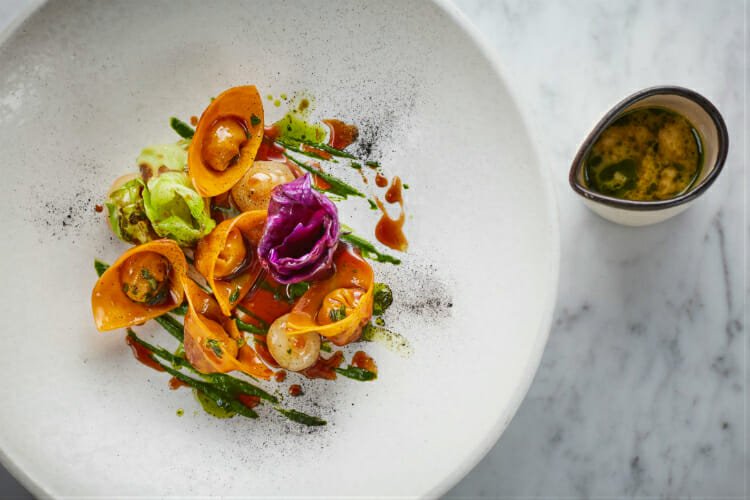 It’s called Caractère, and you’ll find it in Notting Hill, more or less within sight of The Ledbury (they’re not making these inevitable comparisons any easier on themselves), and within a stone’s throw of CORE by Clare Smyth. Step inside, and you’ll immediately note the, ahem, character of the place – with glossy tables and velvet seating counterbalanced by rough brick walls and a cement ceiling. By day, it’s light and breezy; by night, a dimly-lit den that’s intensely romantic.

This blend of edge and polish proves the perfect foil to the food, a creative blend of Italian and French, riffing off Emily’s solidly Franco-centric culinary upbringing and Diego’s own Italian roots. He, by the way, was the head chef at La Gavroche – and oversees all the cooking here, while Emily heads up service.

The menu itself divided into sections of different ‘character’, from Robust mains like seared oxtail ravioli with beef consommé and bone marrow; to Curious small plates, like seared mackerel, confit beetroot, black cardamom and parsley condiment. They’re all available à la carte, or you can try one from each section in their £78 tasting menu.

Turns out, they have the Caractère to pull it off.

NOTE: Caractère is open Tuesday-Saturday for lunch and dinner.  You can find out more, and make a booking at their website right HERE.