Like the plant-based movement, Club Mexicana has come a long way.

Eight years ago, founder Meriel Armitage got the ball rolling by hosting supper clubs in Shoreditch – slinging an all-vegan Californian-Mexican menu, a London first – before quickly climbing the capital’s food ladder. First, she conquered the street food circuit (in Spitalfields Market, Camden Market and KERB Seven Dials), before opening a bricks-and-mortar venue in Soho’s Kingly Court; one that she could finally call her own. And now? She’s made the grand homecoming back to East London, with this Club Mexicana flagship on Commercial Street.

Club Mexicana Spitalfields is housed in the former Hotbox site (the old BBQ restaurant), which before that was also a former printing press, a gallery and a bank. First off: she’s seen the venue’s old vault and – like any sensible person would do – kept it for her stash of premium tequila. For the rest, there’s industrial-chic touches like exposed brick and floor-to-ceiling windows, bright orange and blue colour tones, and a giant glitterball that dangles from the ceiling. Oh, and it’s quite big – playing to a capacity crowd of 70 people and spread over two floors. 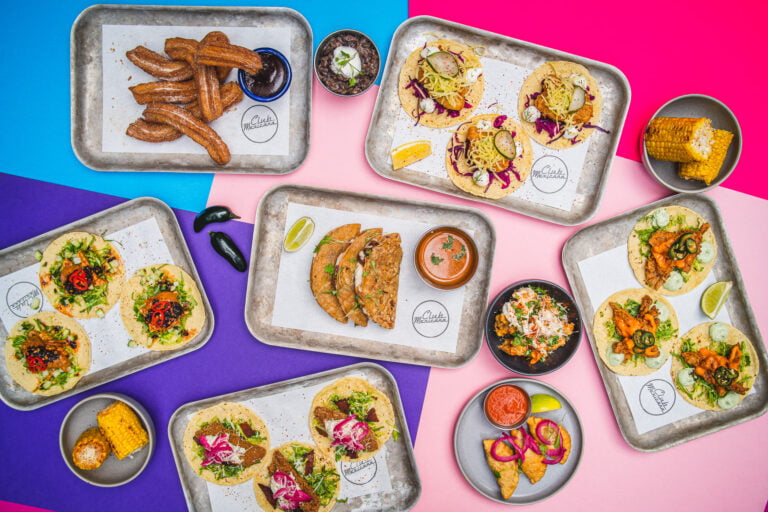 The venue isn’t the only aspect where Club Mexicana has gotten bigger; the menu has been beefed up too (no beef, though). You’ll find all the cult classics here like the Tofish taco (baja fish veganised with beer battered tofu), burritos, and the fully-loaded nachos smothered with ‘ground beef’ and an oozing of melty vegan cheeze. You’ve also got a few newbies to sink your teeth into; from the sweet (cinnamon-dusted churros and a soft serve ice cream that you can lace with tequila), to the savoury (charred sweetcorn coated in house-made mayo, and a birria taco with slow cooked ‘beef brisket’, queso and a chilli consomme dip that features all the juicy flavour of its meat counterpart, without, you know, the meat). If you’re wondering about the absence of chickpeas – for so long the posterboy for the vegan cause – Armitage enforces a strict no chickpea policy here because they’re a bit of a cliche these days. Nothing to do with the chick part… Finally, if you’re in the mood for booze, Club Mexicana Spitalfields’ custom-made terrazzo bar – put together with recycled glass bottles and broken marble – does Mexican twists on standards; think Blanco negronis, chocolate-infused martinis and Mexpresso martinis, as well as Mexican beers and largeritas (a deadly beer/margarita mashup). It’s also armed with a frozen cocktail machine that pumps out slushy-style margs and piña coladas.

That’s something vegan get behind…

NOTE: Club Mexicana Spitalfields is Weds-Sat, 12 noon-late. You can find out more, and book a table, HERE.

Got a penchant for the plant-based? Give our guide to London’s best vegan restaurants a whirl.