So you fancy eating at Dishoom Covent Garden, eh?

But in all honesty, you will have to get in line – as post 6pm, it’s going to be at least 30 minutes long on any given night. Unlike some of the capital’s other prominent queues, however (*cough* platform 9¾…), the one you have to test your patience for here is well worth the wait, and you’ll even be handed a free chai tea for your trouble as you do.

As for the story behind these rampantly popular restaurants… they’re inspired by Irani cafes, the ones that were commonplace in Bombay (or Mumbai, as it’s now known) in the mid-19th century. Beyond the the wait to get in, Dishoom has become a London legend for its curries, street food sharing plates, Anglo-Indian breakfasts (the bacon naans, the sausage naans) and all-round versatility (birthdays, family gatherings, friend gatherings, first dates, 50th dates, a meal to bring you back to life when you’re dying on a Saturday morning). To have eaten at all six Dishoom restaurants in London is like completing a special city side quest. 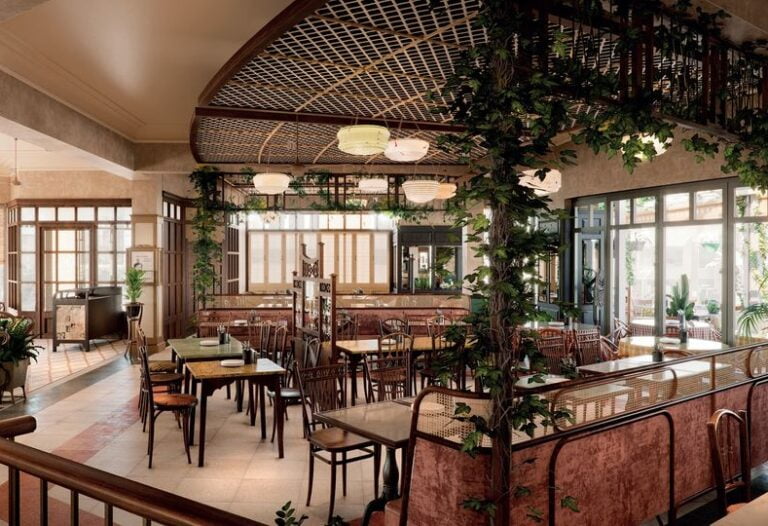 If you’re keen to undertake this side quest in chronological order, you should begin here, at Dishoom Covent Garden, where it all began in 2010. While it’s technically the oldest of the lot, it feels nice and new due to the design overhaul it was given two years ago to mark the venue’s tenth anniversary. Brass chandeliers, cane furniture, a healthy dose of greenery commingle to relay the vibrant theatre atmosphere of Bombay’s ‘Talkies Era’; a glamorous period in the 1940s when the silver screen transitioned from silent film to sound.

As with all the Dishoom restaurants, the line-up of food is largely identical to the other branches (a-okay, in our books), but there’s one Covent Garden-exclusive that sees fillets of sea bream marinated in masala and griddled within a banana leaf. Diehard Dishoomers would probably suggest an order strategy of vadu pau (hot potato vada inside a soft home-made bun), gunpowder potatoes, black daal and chicken ruby as a template to work from.

Of course, if you just came and ate here you’d have only really half-done Dishoom, as the drinks at Permit Bar downstairs (especially the cocktails) open a whole new world where you can explore their various renditions of old favourites like chai punches or a margarita shaken with tumeric-honey lassi syrup. And if you explore a little too enthusiastically? Come back in the morning for a recovery breakfast of bacon naan and fried eggs on chilli cheese toast.

If the sound of those can’t get you out of bed, there’s also less of a queue then…

Allergic to queuing? Book dinner at one of Covent Garden’s other top restaurants