Dishoom have headed in a new direction with their next joint.

The eatery’s fifth branch, Dishoom Kensington is inspired by the golden age of Indian jazz and art deco, styled after 1940’s Bombay. So it’s appropriate that they’re holing up in the very art deco Barkers Building on Kensington High Street, sprawling over their biggest space yet with seats for 200, and a further 50 in their cocktail den, the Permit Bar.

It’s a far grander affair than the back-street café vibe of its forebears. Parquet floors and softly muted wall colours are illuminated by stunning art deco lighting – but there’s still the characteristic smattering of vintage, post-Independence era bric-a-brac around the space, from vintage posters to table fans and radios. On Thursday and Friday evenings, as the week winds down, house band The Marine Liners takes to the stage to serenade you with live jazz. 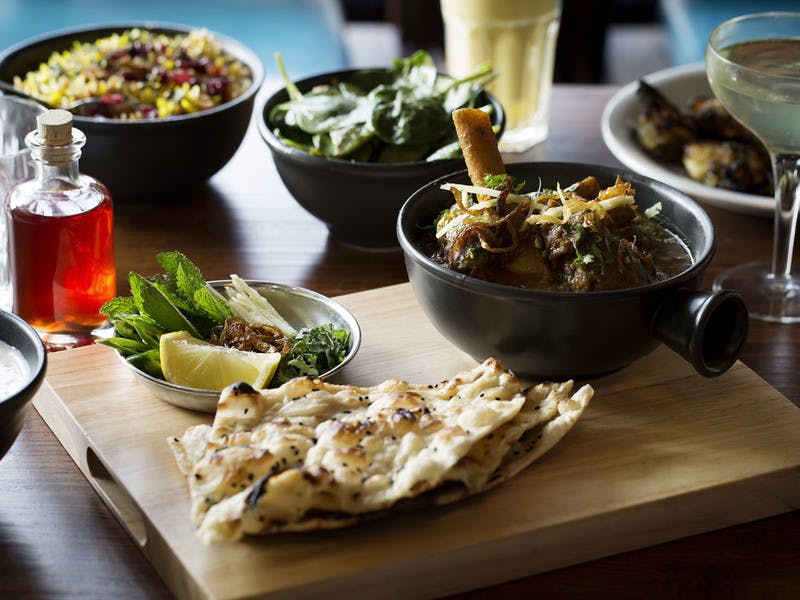 As for the food; it’s at the same great standard that elicits queues round the block at their other branches – from their breakfast bacon naan rolls through to the pau bhaji bun, masala prawns, and gunpowder potatoes. Down in the bar, meanwhile, the cocktail menu has been given an overhaul, with a new roster of boozy concoctions joining their signature fruit sharbats.

After all, even jazz has its standards.

NOTE: Dishoom Kensington is open for breakfast, lunch, and dinner, all week long. For more information, or to make a reservation for either breakfast or lunch (they only do reservations for dinner of 6+), visit their website here.

Like Dishoom? Check out the other branches in London