Dominique Ansel Bakery | The Home of The Cronut

The originals in Dominique Ansel’s New York bakery are so tongue-bogglingly popular that when they launched, they had their own black market, selling on for up to 20 times their original price. No, we’re not kidding.

Dominique Ansel has landed in Belgravia with his first European bakery to add to the eponymous others in New York and Tokyo. And here, the bakery and pastry kitchens are open for all to witness the magic. All glossy and white, there are high top tables, banquettes and even a courtyard with retractable roof out the back.

Dominique’s menu features his signature pastries from the original SoHo bakery, of which the Cronut is just the beginning. There’s The Cookie Shot, Frozen S’mores and Dominique’s Kouign Amann (A Breton pastry similar to a caramelized doughnut). 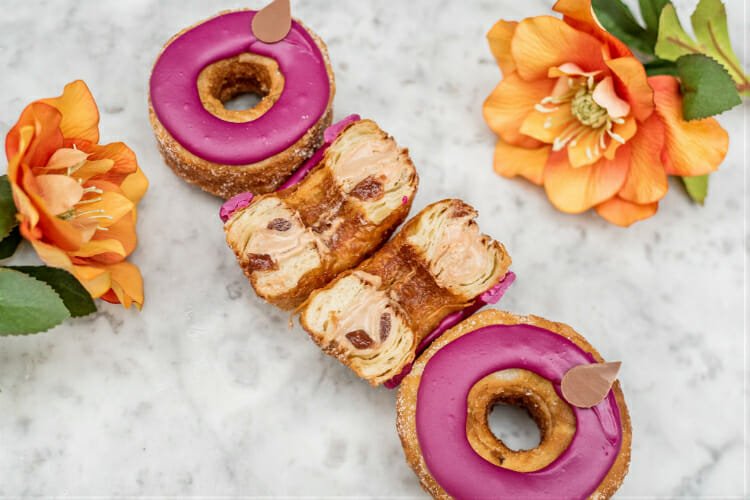 It’s not just a sweet-treat spot, though. You can swing by for shakshuka and eggs benedict in the mornings; lobster rolls and buttermilk fried-chicken sandwiches for lunch; and an exemplary croque monsieur (at any time of day). And if that wasn’t enough, this pastry wizard even conjured some new creations exclusively for us. Over half a year was spent perfecting London-only items like:

Banoffee Paella – an upside-down Banoffee pie made in a paella pan. The result? Perfectly caramelised bananas and no soggy-bottoms.

“After the Rain” Mousse Cake – an impossibly intricate cake with a praline base, flavours of pear and ginger, fresh leaves of lemon balm and jasmine raindrops. There’s even an edible ladybird hidden in there too.

NOTE: Dominque Ansel is open daily from 8am-8pm (9am-8pm on Sun). There are no bookings – find out more HERE.

A glorious brasserie modelled after European Grand Cafés, located in the heart of Piccadilly....