The casual, white-tiled, rustic minimalism of Dean Street newcomer Ducksoup in Soho is the first thing to hit you.

The first is that the restaurant’s name isn’t Duck Soup but “Ducksoup”, which doesn’t mean anything but does sound quite nice.

Launched by a team who used to work at Hix in Clerkenwell, reviews of Ducksoup justifiably highlight its relaxed ambience and its small European-inspired menu (which changes daily) of around six starters, six main courses and a choice of desserts and bar food.

The handwritten menu, which is posted on the restaurant’s website each day, features dishes that are made with the best of British seasonal produce.

A typical day might see you try chiperones, crevettes, chilli and fennel seed or marinated aubergine at the bar; a starter of roast quail, burnt lemon and harissa; and a main course of lamb cutlets with lemon and salt or fritto misto. 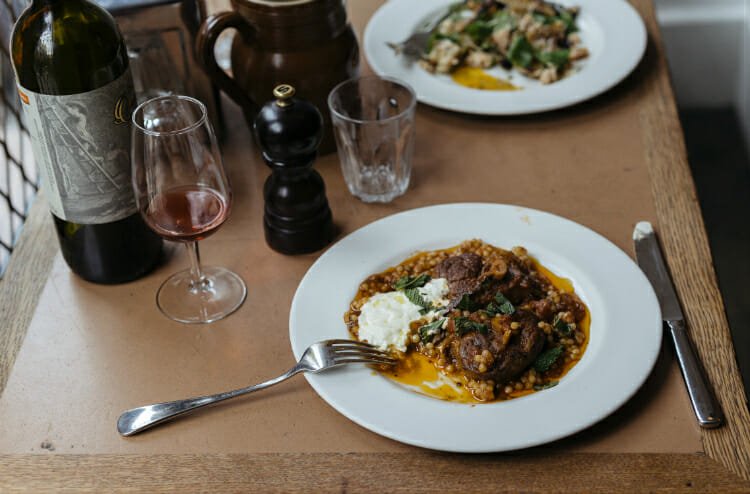 Some additional reasons to visit, if they are required:

1. There’s a record player in the corner: bring your own vinyl and they’ll play it while you eat.

2. The German for lager is “Helles beer”.  Last year a German brewer won approval from the European Trademark Authorities to name it’s new lager after the Austrian town of “Fucking”.  Fucking Hell (or, “Lager from Fucking”) is available at Ducksoup.

3. They serve a selection of natural wines, the absence of sulphites within them meaning that you can have as much as you like without the risk of having to endure a hangover the next day.

As a small place which only takes reservations for lunch, you’ll be likely to queue for an evening table.

But it’s worth it: just don’t forget that vinyl.

NOTE: Ducksoup is open all week. They take reservations for lunch, and for dinner (although dinner reservations must be for groups of three or more). Find out more on their website HERE.

Like being in the loop about London’s newest restaurant openings? Check out the Nudge’s guide to the best recently opened restaurants