India is a vast nation, filled with dozens of rich regional traditions – but all too often, Indian restaurants here in the UK try to be the jack of all culinary trades, and the master of naan.

Which is why it’s refreshing to come across a place like the DUM Biryani house.

Coming to us from Dhruv Mittal (ex-Fat Duck), it specializes in Hyderabadi biryani, and more or less only Hyderabadi biryani. For those who haven’t butched up on their regional dishes of the Asian subcontinent before coming here, a biryani is a dish in which meat, spices, and rice are all cooked and served in the same pot, creating a layered, infused flavour.

Easy there, though. Before you dive into the main event, you’ll want to get involved with snacks like chicken lollipops tossed in a hot & sour masala, or stir fried king prawns in red chilli and coconut. Then, appetite suitably whetted, you can have a go at their one-pots. The star of the show is irrefutably the lamb shank biryani; presented as a generously portioned thali platter, this comes accompanied by beetroot raita, padron pepper and peanut curry, pickles and papads (bite-size papadums). 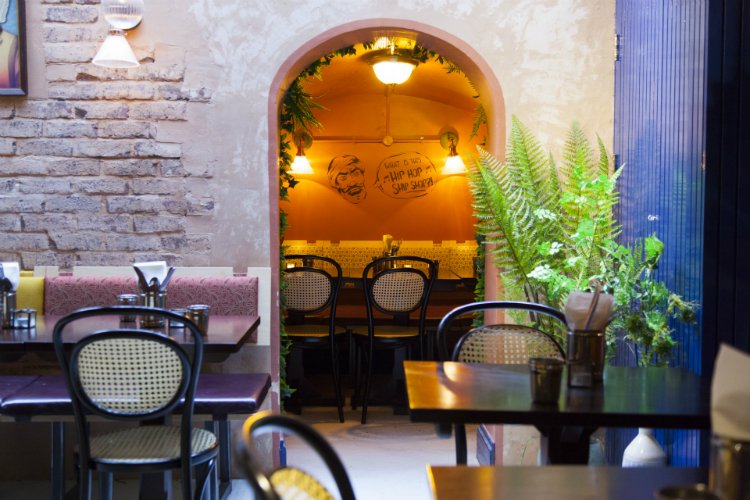 A new addition to their roster, Sunday brunch involves a feast of Indian breakfast dishes including the famed Eggs Kejriwal (a 60s dish comprising sourdough topped with coconut chutney, a fried egg and grilled cheese), masala paneer pav (homemade paneer cheese in a delicious, lightly spiced sauce, sandwiched between toasted brioche), and of course, the star biryanis – all of which you can have alongside bottomless Indian punch (that’s rum, pineapple, passionfruit and mango juice) served in your own personal copper cauldron.

Not a real one; don’t panic. It’s merely the name of their late-night bar menu, named in honour of 1920s speakeasies. The wine and beer list is pretty concise, and there’s a couple of traditional drinks like salted lassi and chai – but the barkeeps come into their own with the bespoke selection of spice-infused cocktails, like the Zaffrani Zamana (a heady mix of saffron infused whisky, bitters and cane syrup) and the Gande Sapne (a kind of espresso martini souped up with cardamom and sesame seeds). You can mop them up with bar snacks like hot & sour Kodi Vepudu wings and flatbread with masala pumpkin.

Sound good? You can get it all from your DUM waiter.

Like being in the loop about London’s openings? Check out our guide to the best recently opened restaurants in London