And if that sounds like a mouthful, just be grateful they haven’t moved onto the stage of being known as a symbol yet.

It’s the new incarnation of the legendary Black Axe Mangal, rising phoenix-like from the ashes of the pandemic. You’ll still find it behind that unmarked, matte black shopfront on Highbury Corner, concealing a restaurant that’s essentially a second home for many Islington locals.

The decor hits you like a slap in the face with a football rattle – the music is loud, heavy and metallic; the tables Hawaiian-shirted; the wood-fired oven spray painted with Californian punk band The Warriors; and the walls have been given a paint-job by Midas. It’s small but mighty, with room for less than 30 diners and a band of tattoo-covered chefs working busily over the hissing grill. 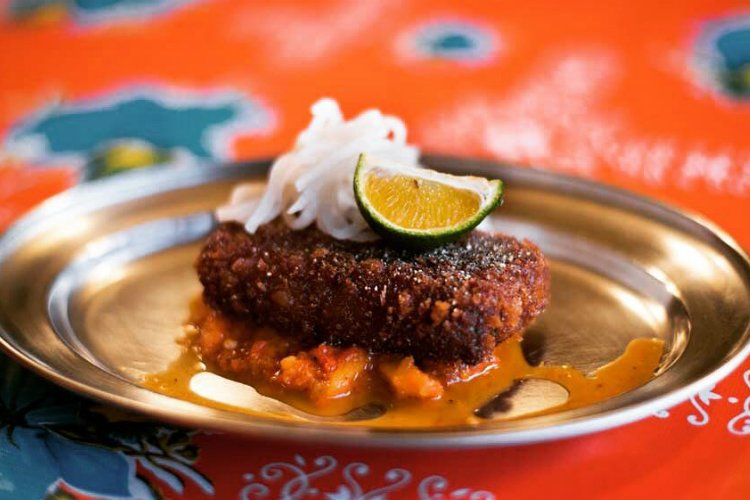 Head chef and founder Lee Tiernan worked at St. John for a decade before opening this place, and his dishes are filled with nods to that venerable institution, and others like San Francisco’s Mission Chinese. But Tiernan doesn’t so much nod as head-bang: bone marrow is roasted with slow-braised oxtail; pig tails are battered and studded with sesame; and there are mermaid glitter-dusted squid ink profiteroles filled with cod’s roe and runny egg. Each week, he announces a set menu of greatest hits up on Instagram (veggie/vegan options available), hovering around £45 per person.

Despite having all the ingredients for being an irritatingly loud, over-hyped hipster trap, it’s anything but. F.K.A.B.A.M is brash and chaotic in all the right ways – uncontrived, upbeat and extremely functional. You’ll get your food on time, and it’ll taste delicious, because Lee Tiernan is a culinary genius and doesn’t shower things with glitter without good reason.

2) Don’t let your grandmother look at the floor too closely.

NOTE: F.K.A.B.A.M is open Wednesday – Friday evenings from 6pm. You can make a reservation here.

Like eating in Highbury? Take a look at our guide to the best Islington restaurants