A gridiron is basically an iron grid.

10 points for creativity to the person that named it.

And 10 thousand points to the person that first decided to use one to cook stuff.

Because it formed the basis for live-fire grilling, one of the most enduring, delicious, simple, and satisfying styles of food that’s been used for thousands of years, everywhere from wild untamed plains, to ancient civilisations, to hotel restaurants in Mayfair that formerly housed iconic ’90s nightspots.

This is one of the latter.

And as far as talent goes, it comes to us from the prime, top-shelf, butchers-choice fillet of meat-based expertise: Richard H Turner, executive chef of Hawksmoor, director of Pitt Cue, and man responsible for bringing Meatopia to the UK. He’s being joined by head chef Colin McSherry, whose CV includes stints at The Fat Duck, The Ledbury, and The Clove Club. In short, they know what they’re doing. 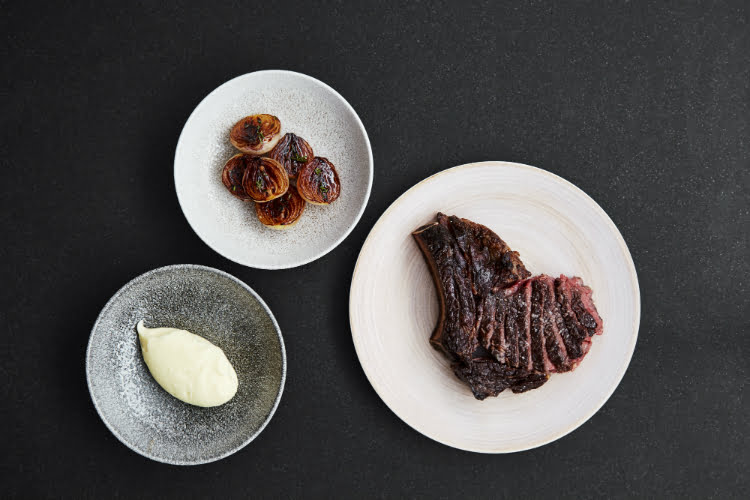 The space they’re uniting their beefy banners under used to be The Met Bar at the COMO hotel – they’ve kept the bar and turned it into an open kitchen with a sleek marble bartop separating the diners from the custom-made gridiron itself. And spilling out in front of that kitchen is an understated dining area whose pale walls are hung with black & white prints, and lined with leather banquette seating.

The menu is surprisingly short, with but half a dozen starters backed up by just three chops and three steaks – meaning that a great deal of attention is payed to each one. You can start with wood-roast scallops baptised in bone marrow XO sauce; or burnt leeks with hazelnut aillade (it’s like the French lovechild of pesto & aioli); or perhaps braised beef shin with smoked eel & watercress.

The main events, all scorched on the gridiron in front of you (should you be at the bar, that is) include a hefty Barnsley hogget lamb chop; a juicy middle white pork chop; and a rich, fallow deer chop. The steaks, meanwhile, have a Shorthorn onglet; a Highland sirloin on the bone; and a massive Dexter prime rib which is large enough to share. The sauces range from classic béarnaise and bone marrow, to more inventive numbers like their porcini bread sauce.

Of course it’s not ALL pure meat – they’re also serving up the likes of roast turbot with a chicken butter sauce; a classic Dover sole meunière with brown butter & capers; or some artichoke with ratte potato & pecorino, plus green sauce & winter truffle, among others. 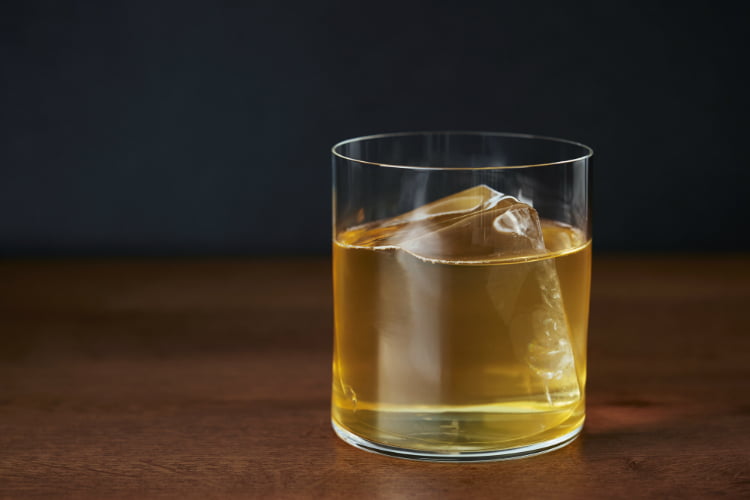 The cocktails have been curated by the award-winning drinks-smiths behind Dalston’s Three Sheets, who’ve put together a menu of upscaled classics, including an Old Fashioned made with whisky, pandan, and clear milk; a Bloody Mary with vodka, mustard, butter, stock and tomato; and a transparent White Russian (pictured above) whose vodka & coffee are underscored by a little miso.

NOTE: Gridiron is open for lunch and dinner Monday-Friday, and for just dinner on Saturdays. You can find out more, and make a booking at their website right HERE.

While you’re there… you should check out The American Bar at The Stafford. It’s round the corner, and it’s delightfully quirky.