St Christopher's Place is About to get a Lush New Italian Eatery...

Selfridges is about to become the filling in a delicious Italian restaurant sandwich.

Playing the part of the top slice up on the department store’s roof, you’ll currently find Alto by San Carlo, a lush, trellis-covered Italian retreat. And next month, the bottom slice will be arriving at the foot of the shop (well, a few yards away in St Christopher’s Place) in the form of Isola by San Carlo, a similarly lavish eatery inspired by the Islands of Italy.

And, altitude included, this new venue will be very different. Right from the outset, it’ll aim to impress and rubber-stamp its own identity. For one, it’ll present itself with a raised alfresco terrace wrapping almost entirely around the building, totally covered in greenery, and deigned to mimic the garden of “a grand Sicilian home”. 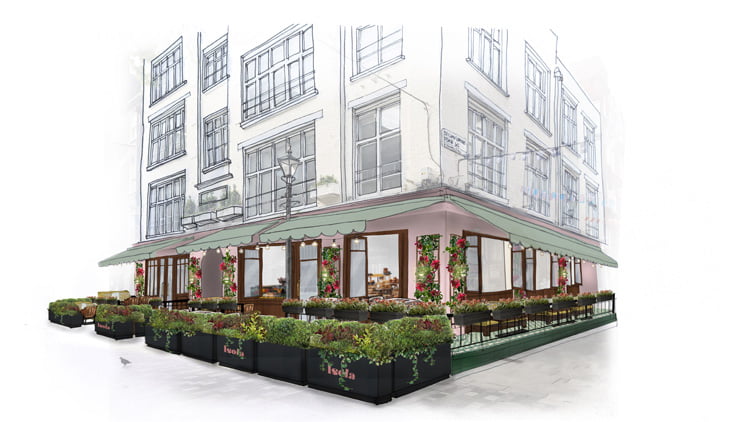 Then, heading inside, the scale of the place will likely be the first thing to hit you – there’s going to be enough room for 220 ravenous diners, in a space draped in an appetite-whetting colour palette inspired by some of Sicily’s most famous exports, including “lemons, pistachios and prickly pears”. If every a restaurant looked literally good enough to eat, this may be the one. There’ll be plenty of brass & marble lavished about, and there’ll be a large specially commissioned mural by acclaimed artist Jessalyn Brooks above the bar downstairs.

As for the food? Well, as well as a smattering of San Carlo signatures (thank you, tagliolini lobster) you can expect dishes plucked straight from the various Italian islands themselves, including lamb & porchetta from Sardinia, and the dream-like seafood (think red prawns, swordfish and tuna) from Sicily. And just in case you were thinking that while all that sounds lovely, but it would be just perfect if they opened all-day and served a classic Sicilian granita di limone with brioche for breakfast…

NOTE: Isola by San Carlo is set to open this August. We’ll be back then with the full scoop. In the meantime, you can find out more at their website right HERE.

Fancy a preview of the food? Take a peek at Alto by San Carlo…

1771 Mark Jarvis has a new restaurant, and it’s serving tasting menus only….