In 2001, Atul Kotchar became the first Indian chef to receive a Michelin Star, at the age of just 31, while working at Tamarind in Mayfair. A few years later after moving onto Benares, also in Mayfair, he won another Star.

You can see a pattern emerging.

Now he’s opened Kanishka. And it’s in Mayfair. The idea of this new project is to explore some of India’s lesser-known regional culinary styles, particularly those from the Seven Sister States in the easternmost region of the sub-continent (Arunachal Pradesh, Assam, Meghalaya, Nagaland, Manipur, Tripura and Mizoram). In fact, the place itself is named after a second-century king of the region.

This space itself is a two-floor affair: up top you’ll find an azure blue cocktail bar surrounded by marble-topped tables, and underneath there’s a smaller area with thick, verdant greenery hanging down from the ceiling. There’s even a 12-seater ‘garden room’ if you fancy a private diner. 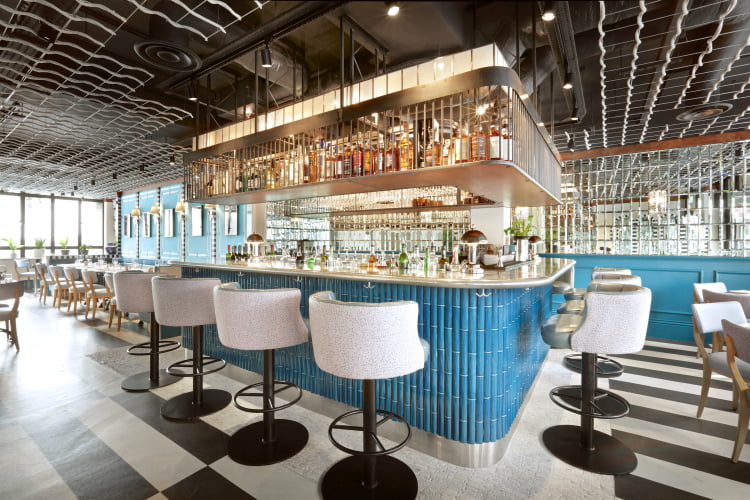 On the menu, that regional cuisine comes out in the form of starters like plump Naga scallops with smoked chilli; Kurkure soft shell crab fried to a perfect crispiness and served with passion fruit chutney; and some Sikkim inspired venison tartare with quail egg and butter naan.

Washing all that down, there’s a cocktail list that also includes a kind of highball pick-n-mix: you can choose from a list of almost a dozen flavoured distillates (cinnamon, star anise, kaffir lime, turmeric, lapsing, etc.) the blend them with either gin/whisky and a splash of tonic/soda. It means you can create combos like a coffee & black cardamon g&t, or a cinnamon & blood orange whisky soda – among hundreds of others.

If you fancy mixing it up.

NOTE: Kanishka is open now. You can find out more, and make a booking at their website right HERE.

Want a drink before hitting the restaurant? Here are the best bars in Mayfair…