And Kazu, we’re told, is an izakaya.

So although it may at first glance seem like a traditional sushi joint, you can expect a little more fun than formality, as well as a fine menu of Japanese classics.

It comes to us from the former head chef of the critically lauded Chisou, and finds itself square in the middle of London’s unofficial restaurant centre of gravity, Charlotte Street. That square is mirrored a little more literally inside the place, which is decked out with classic Japanese minimalism, all clean lines; sleek wooden counters; and a trellised ceiling. 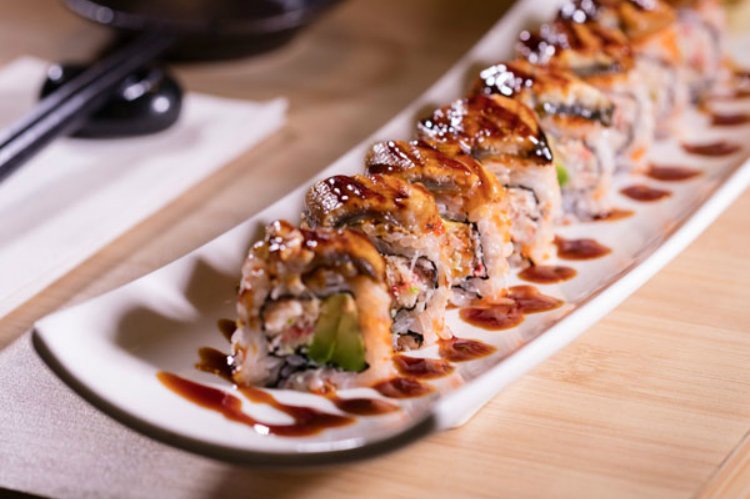 The true artistry, of course, is found on your (also square) plate. Thanks to chef Dham Kodituwakku’s three decades experience in the kitchen, the dishes here are a cut above your average. There are sharing plates of ponzu-drenched beef tataki; deep fried lotus roots; and buttery wild mushrooms. But of course it’s the sushi you’re here for – served as sashimi, hand rolls, maki rolls, inside-out rolls, nigiri, and more. And as if they were concerned that London’s diners could turn their nose up at any of that, they’ve also slung in some pan-fried teriyaki and noodle dishes to boot.

And to drink? There’s wines, beers, Champagne and sake… but we would strongly suggest ordering multiple affogato, where the vanilla ice cream is steeped in sake made according to an ancient, 300 year old recipe.

Good thing nobody ‘ffogato it.

NOTE: Kazu is open for lunch and dinner, Monday-Saturday; and just dinner on Sundays. You can find out more and book on their website HERE.

Like Izakaya-style restaurants on Charlotte Street? Head to Roka…