We have a conspiracy theory.

After careful, balanced consideration of all the facts, we have been forced to conclude that hairy ’70s rock band 10cc are definitely, 100% guaranteeably time-travellers.

How else could they possibly have captured the sentiments of hundreds – nay, thousands – of Londoners when they sang “I don’t like cricket, oh no – I love it” – undoubtedly referring to contemporary Indian restaurant Kricket, that’s been delighting patrons since 2015?

Well, as a result of this ardent affection both past and present, Kricket has listened to the voice of the people and officially expanded from its temporary home in Brixton, to a brand-spanking-new, bigger, better and more permanent branch in Soho.

Not forgetting its roots in Pop Brixton’s shipping container space, Kricket Soho has retained a relaxed, industrial feel, with exposed piping, brick walls, and an open kitchen with counter seating for those who like to be in the thick of things. But in a nod to their newer location, there are touches of opulence in the form of brass and dusky coral bar stools, and gentlemen’s club-style wicker booths.

The food, if you haven’t already had the pleasure, is Indian-influenced but rustled up with seasonal British ingredients, and comes courtesy of chef Will Bowlby, who came back from two years cheffing in Mumbai to launch Kricket with his old chum Rik Campbell. 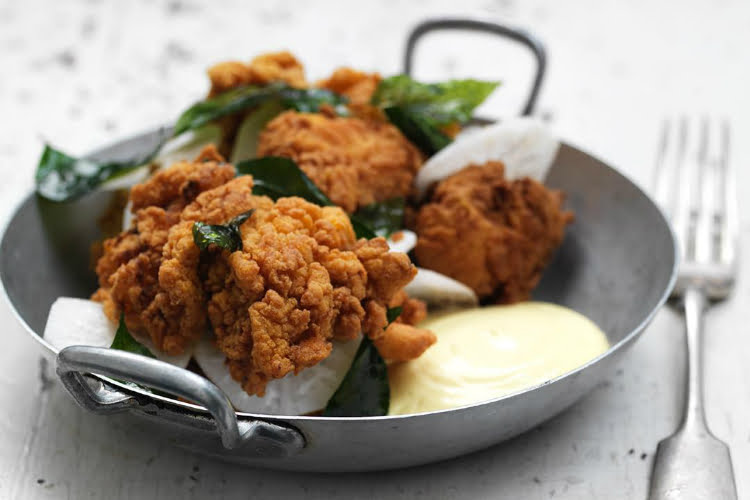 They’ve brought many of their signature Brixton dishes with them (like their best-selling samphire pakoras and Keralan fried chicken) as well as a spread of new options from the tandoor oven and robata grill – like the ‘Coronation’ smoked mackerel, gooseberry chutney and nimki; gunpowder sweet potato with raita; and lamb chops with black stone flower, sweet yoghurt and peas.

Add to this a dedicated bar serving Partizan craft beers, tamarind sodas and a rotating series of six Indian-inspired cocktails like the ‘Nothing to Declare’ (mezcal, yellow chartreuse, jaggery and grapefruit), and you’re close to picturing the wonders in store for you. And you’ll realise 10cc were wrong about just one thing.

You are in love.

NOTE: Kricket Soho is open for lunch and dinner Mon-Sat, and thankfully now takes reservations, although they do also keep back tables for walk-ins (and operate a virtual queueing system). You can find out more, and book, HERE.

Like dining in Soho? Check out our pick of Soho’s best restaurants.