The kudu, a subspecies of antelope, apparently comes in both Greater and Lesser varieties.

This concerns the former.

A neighbourhood-styled eatery right in the heart of Peckham, Kudu takes inspiration from South African cuisine. It’s something that comes naturally to chef Patrick Williams, who’s combining his own roots there with a cooking style finessed at the (much-missed) Paradise Garage, while co-owner Amy Corbin is cutting her teeth as the next generation of the Corbin & King dynasty – the restaurateurs behind such hard-to-spell dining spots as The Wolseley and The Delaunay.

The simply named Kudu sports a deceptively simple interior, too – roughly-plastered walls are dressed up with dusky rose pink paint, whitewashed brickwork and sporadic duck-egg tiling; the banquettes are long, velvety and teal blue; and accents come in the form of mid-century style furniture, vintage lighting and delicately framed pressed botanicals on the walls. It’s the kind of attention to detail that filters down to –

Intriguing, seasonal dishes are the order of the day here. Those South African influences show themselves in the braai (barbecued) cauliflower served with raisin purée and purple kale, and the mussel potjie (coal-cooking pot) with seaweed gnocchi; but the owners’ self-stated aim is to ‘celebrate hunters and foragers’, so you’ll find unusual combinations like the pig’s head tortellini with mushroom and hay broth, and chicken parfait with leek ash cracker, too. 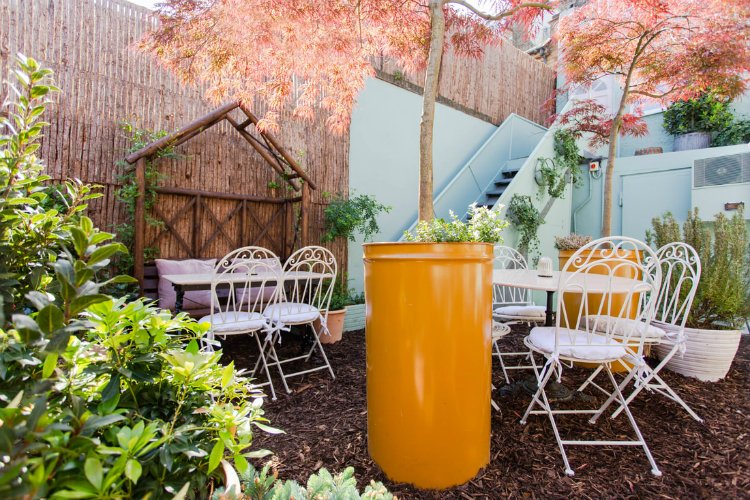 This continues right through to puddings, which include pumpkin tart with charcoal sorbet, and goat’s cheese with walnut toast and rooibos quince. Head over on a weekend morning, however, and you’ll be presented with a brunch menu flaunting dishes like Boerewors sausage with romesco and white beans, and French toast chocolate babka served with orange cream and miso caramel.

You’ll be washing it all down with locally brewed Peckham Pils, a slick of classic, well-made cocktails, or one of their well-chosen wine list, which, naturally, has a fair few bottles plucked from South Africa.

NOTE: Kudu is open Wednesday-Sunday, 6-10pm, as well as 12pm-2.30pm for lunch on Fridays and 11am-2.30pm for brunch at weekends. They hold back some tables for walk-ins, but you can also reserve online HERE.

Peckish in Peckham? Read our guide to the best restaurants (we won’t make that pun again).