Following the tried & tested expansion plan that so many pizzerias fall into, L’Antica Pizzeria Da Michele opened in Naples in 1870, waited one and a half centuries, then opened a second venue in Stoke Newington, moved it to Marylebone, waited a further 2 years, and opened a branch in Soho.

It’s almost a cliché at this point.

But L’Antica stand apart from that crowd, because if there can be such a thing as the ‘world’s best pizza’, then they certainly have a solid claim to its ownership – they literally helped invent Neapolitan-style pizza (and therefore, modern pizza itself), and have spent the last few generations acting as doughy purists of the art form. 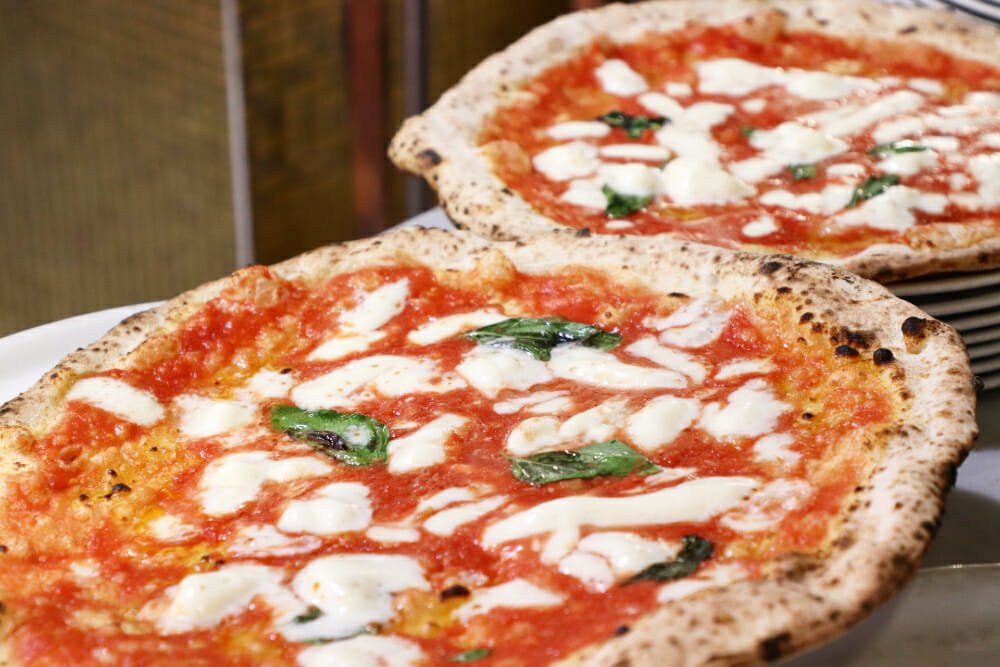 They’ve landed in Old Compton Street in a space filled with flowers, green marble, neon slogans, glitzy pendant lighting and a bar that looks like something taken out of the Natural History Museum’s spirit collections. It’s not the most understated space per se, but you’re not here for the decor. You’re here for the gigantic, wood-burning pizza oven taking up half of the ground floor. It clocks in at a casual 500˚C, and scorches each pizza for just 60 seconds.

Thus, those pizzas are all hand-pulled, and not quite perfectly circular, and flecked with black-burnt spots. Like the Marylebone branch, it serves the same expanded menu from the Naples original: their two classic pizzas, the Margherita and Marinara; the Marita (a half-and-half number); the O’Cazone with pressed pork and salami; the Salsiccia e Friarelli with fennel sausage; and their fried pizza (the one that was originally served back in 1870). There’s even a Gold Pizza, with medallions of lobster, caviar and shellfish bisque covered in 24 carat gold leaf.

Then there’s the cocktail menu, which is very much new territory for them. But this is Soho, so it’s the done thing. There’s a list of Italian aperitifs (various Spritz’s, Americanos, Bellinis, etc.), classic cocktails, and signature drinks, the latter of which includes one called the Green Eyes, which blends absinthe, rum, and pistachio cream.

Which, unlike the pizzas… will be hard to top.

NOTE: L’Antica Pizzeria da Michele Soho is open daily for lunch and dinner. You can find out more, and book (only for tables before 7pm) HERE.

Like topped dough? Check out the best places for pizza in London