London’s dining scene could really do with a little Lucknow.

So it’s quite convenient that Dhruv Mittal – ex-Fat Duck chef, and founder of the excellent DUM Biryani – has given it just that, in the form of his new restaurant Lucknow 49 (previously mooted as Lucknow Social).

He’s parked it just off Regent Street, on Mayfair’s Maddox Street, in a colourful space filled with earthy hues, sofa-like banquettes, scattered cushions, and warm wood floors. Its specialist subject, and the reason for its name, is Lucknowi cuisine. Just what IS Lucknowi cuisine, you quite reasonably ask? Well, the place itself is a city in Northern India near the border of Nepal, so it borrows a lot of culinary influences from Asia and the Middle East, making it one of the most interesting of the regional Indian styles. A great deal of dishes are prepared ‘dum’ style, meaning they’re cooked slowly over a low flame. 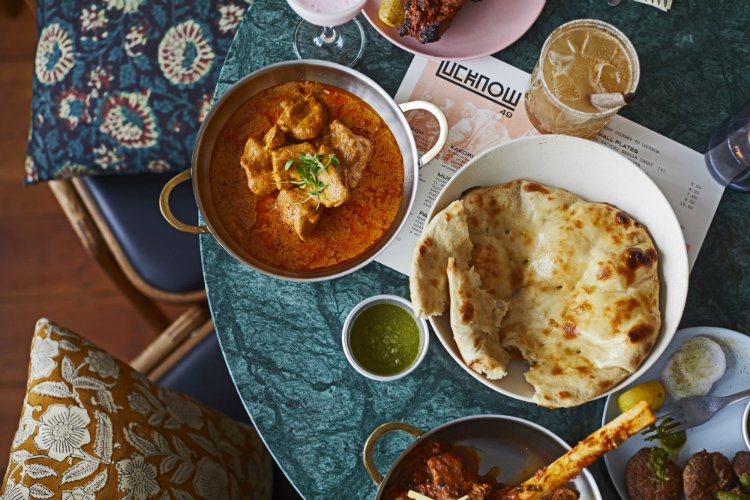 All of that means that you can expect a menu including a Kakori kebab spiked with clove, black pepper, and cinnamon, then grilled over coals; and a lamb galauti made with minced lamb with over 50 dry spices, which is then hand-pounded into a soft paste and gently fried (originally invented for a toothless viceroy, apparently). You can also expect the classic biryanis that Dhruv Mittal has become known for, as well as a generous helping of slow-cooked dishes, including a white rice dish made with 16-hour simmered lamb stock.

To drink, celeb sommelier Zeren Wilson has taken on the task of curating a short-but-sweet wine list to pair with all of this fiery food, and Hackney Brewery have created a bespoke beer for the restaurant, too.

Like good Indian food? Seriously, who doesn’t. Head on over to Gunpowder for a treat…