The most quintessentially British food…

…is the kind that ruthlessly steals the best bits from other nations’ own cuisine.

So proudly British restaurant Lupins – now open in Flat Iron Square – has absolutely no intention of stopping the tradition. Set in a small townhouse backing onto the railway arches between London Bridge and Southwark, it features old-fashioned British food with a globally inspired twist.

Quirkily laid out over several rooms, the space is light and airy, with alternating patches of exposed brick, large windows and cushion-laden pastel pink banquette seating hugging the white walls. There’s an open kitchen to your left as you come in, filled with bustle and guarded by a smooth steel dining counter; the perfect perch for a little breakfast in the morning. 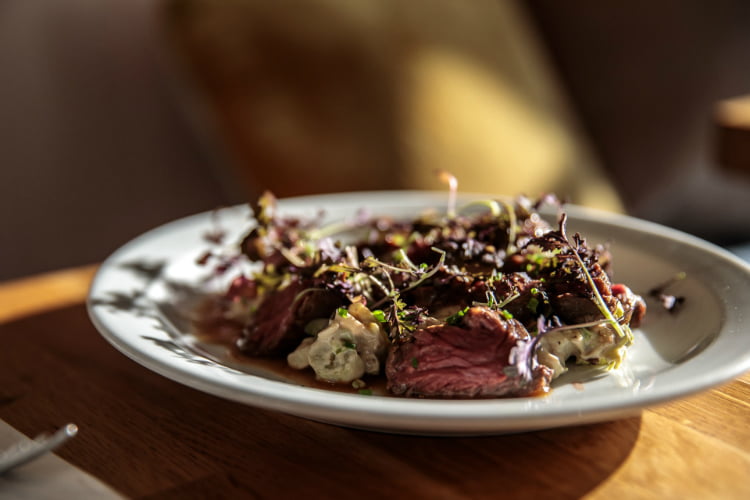 Right from the outset you can see the neat little twists hitting the more traditional British dishes, which are all served as sharing-style small plates – Jersey Royals with asparagus and a soft boiled egg are all spiced up with some za’atar; the roast pigeon is marinaded in chipotle; and the sea trout comes with seaweed butter. Plus, it’s an entirely nut-free restaurant – so those with an allergy can relax.

For dessert, things revert back to traditionalism with the likes of fresh figs and yoghurt, or a plate of Neal’s Yard cheeses.

It’s as British as apple pie.

NOTE: Lupins is open for lunch and dinner, Mon-Sat. You can check out the website, and make a booking, right HERE.

If you’re at Flat Iron Square… you’ll want to know Where The Pancakes Are.