There’s something rather special about passing the clipboards on the door of 27 Poultry; wandering through the throngs of cocktailing revellers, diners and loiterers soaking up the atmosphere around the live music podium; and generally taking in The Ned‘s vastness, opulence and buzz…

The irony of how much interest it’s currently accruing is therefore not lost on us.

Named in honour of The Ned’s architect – Sir Edwin Lutyens, an Englishman who designed many English country houses, war memorials and public buildings, and whom the architectural historian Gavin Stamp once described as “surely the greatest British architect of the twentieth (or of any other) century” – Lutyens Grill is attractive in large part for the seclusion and privacy it offers: go there for dinner and you’ll immediately feel as though you’ve snuck into one of the member-only spots in the building (which this initially was).

Combining the distinct, rich mahogany feel of an old school gentleman’s club with Persian carpets, green leather armchairs, and plush banquettes along the wall, the scene is perfectly set for the old-fashioned trolley that you may spot making the rounds – filled with meat ready to be carved, and fish ready to be filleted – and which serves as a rather visceral introduction to… 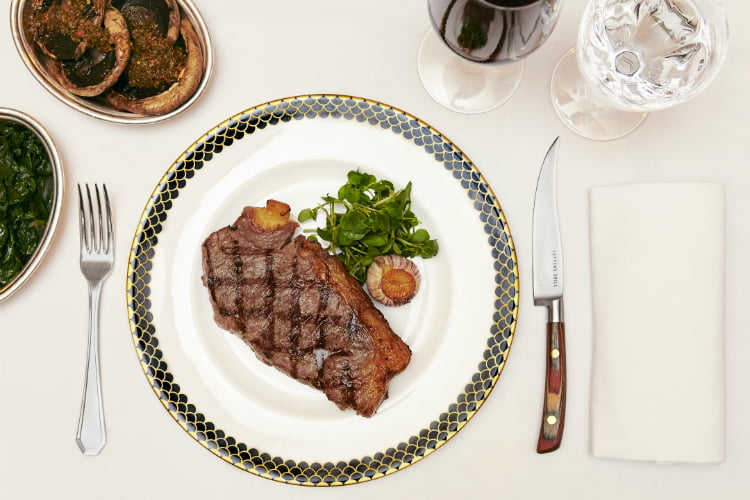 Browsing the menu is when you realise that 1) this is really one of those “special occasion” type of places, and 2) the ‘Grill’ suffixed to the restaurant’s name is there for a good reason – most of the food comes in cuts ready to be scorched on the iron. So once you’ve made your way past the starters (hay smoked venison carpaccio; some Orkney scallops; cauliflower & black truffle soup, etc.) and seen what’s on today’s trolley, you’ll be greeted with a library of steaks. Everything’s indexed by its place of origin, weight, cut, ageing time, and breed. In all, there are around a dozen and a half different varietals available from across the British isles, and as far away as New Zealand, Japan, and Uruguay. If you’re so inclined you can add black truffle by the gram, as well as sauces like Armagnac & green peppercorn, Bordelaise, and chimichurri (alongside the classics).

Of course, no steakhouse would be complete without something very nice to drink, and Lutyens doesn’t come close to disappointing in that regard. Yes, you can pair your beef with classic – but not necessarily widespread – cocktails including a Corpse Reviver No.2 (with gin, citrus and absinthe), a Maple Leaf Sour (whisky, apple, maple), or an Eastern Standard whose vodka, mint, and lime will refresh any palate… but  a better choice would be to ask the sommelier to take you through the restaurant’s extremely impressive wine list.

NOTE: Lutyens Grill is open at week long, at The Ned. You can find out more, and make a booking at their website right HERE.

Like Soho House restaurants? The head to Cecconi’s Shoreditch…