Maresco is a Spanish seafood restaurant with a strong Scottish accent.

If you’re able to speak a bit of Spanish then the clue is in the name (mar means ‘sea’ and escocia means ‘Scotland’), with the linguistic fusion pointing to the wider idea: they take Scotland’s finest traditional seafood, and use it to make Spain’s finest traditional recipes. And it’s an idea that’s already been successfully road tested in Stoke Newington’s Escocesa (Spanish for ‘Scottish’), a restaurant with a very similar ideology (and which has scooped up some fine reviews). Owner and Brit Stephen Lironi, a former record producer who used to write songs in the Hollywood Hills, got his inspiration for the whole thing after reading an article in The Guardian about how top-end sea critters lurking within Scottish waters are usually imported to Iberian shores, so he thought he’d flip the script and bring the best of both those worlds right here.

You’ll find it on the corner of Soho’s Berwick Street, where it occupies a two floor space lit by a large neon sign (“espania, escocia, y el mar”- Spain, Scotland, and the sea) which overlooks an open kitchen with a long counter. And you’ll want to sit at that counter, where you can see the chefs beavering away with little delicacies, that you’ll no doubt enquirer about, and get dishes handed to you directly. There’s no hidden prep kitchen, and you see the chefs routinely pluck a langoustine from the ice tray at the end, and deftly and turn it into a mini masterpiece right before your eyes. 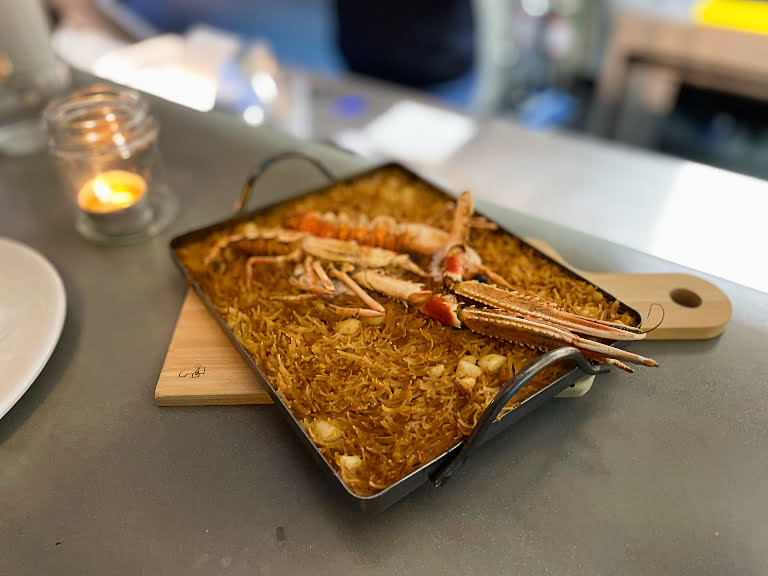 Those chefs are a Spanish superteam in the shape of ex-Barrafina and Moro chef Pablo Rodriguez (who’s steering the ship in the kitchen) and Naroa Ortega, who’s taking care of front of house (and whose credits include a stint at Bilbao’s Asador Etxebarri; this year receiving the respectable ranking of 6 on The World’s 50 Best Restaurants list). The menu is short and sweet with an emphasis on blackboard specials, but a few of the highlights include txistorra del mar, a Basque sausage made with mackerel and monkfish; Scottish oysters with green gazpacho; and fideuà, which is a rather remarkable pasta-based paella featuring Scottish langoustines. The dishes are quite lovely, and rarely miss – it seems that taking great produce and weaving it into great recipes isn’t such a bad idea after all.

It’s all in Spain’s hands when it comes to Maresco’s drinks selection too, with wines picked from lesser-known regions, mostly of the low intervention kind, and those of which the owners have taken a liking to on their travels. There are sherries, cocktails and gin & tonics too.

NOTE: Maresco is open now, Monday-Saturday. You can find out more and make a booking at their website right here.