The Som Saa Chefs are Opening a New Restaurant

NOK is the abbreviation for the Norwegian currency Krone.

Which may not be why Andy Oliver and Mark Dobbie have titled their next restaurant Nok, but it’s good to know in case you ever go to Norway…

Upon further detective work, Nok actually means bird in Thai, which may hint to what they’ll really be focussing on food-wise. While details are still in the earliest stage (strong emphasis on earliest), the important thing is that it’s out there – like a teaser for a movie trailer – that the highly-lauded duo are working on a new restaurant, near Borough Market, in Park Street, under the name Nok, and it’s very exciting news. 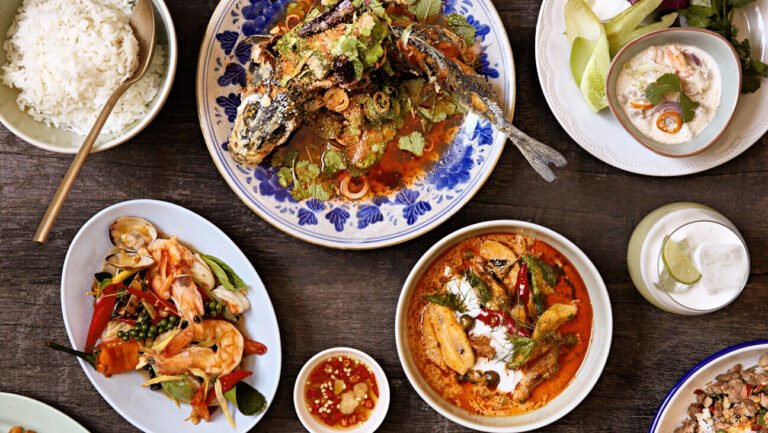 The food at Som Saa

So why the big fuss then? Firstly, Andy (a former MasterChef finalist) and Mark both worked at the world’s first-ever Michelin-starred Thai restaurant, the now defunct (RIP) Nham. And secondly, it’s been a minute since the duo last opened a restaurant. Their debut pop-up, Som Saa, fast became one of the best Thai restaurants in London, thanks to some of the hottest (in both senses) dishes in the city – like the trout red curry stir-fry with snake beans and kaffir lime leaves – plus equally spicy cocktails where they reworked leftover ingredients (like those kaffir lime leaves) into signatures such as the Muay Thai Kick (which also features gin, Thai basil and soursop).

The temporary-to-permanent-venue evolution that Som Saa went through started as a crowd fund (with the goal of making £550,000 to finance a fully-fledged restaurant), and they completely smashed it, making £700,000 in just three days. That’s the level of popularity you’re dealing with here.

As we mentioned earlier, this is very much the announcement phase rather than a full-on four-minute trailer, but considering the heads in charge, you can bank on this being a big one.

No doubt they’ll nok it out of the park…

NOTE: Nok will be opening some time in 2023. We’ll be there with all the tasty details as soon as it does, but for now there’s always the option of booking a table at Som Saa…

Alright, now that you have an unshakable desire for Thai food… How about paying a visit to all the other great Thai restaurants in London?