Pirates and interesting, wine-bar based restaurateurs don’t appear to have a huge amount in common.

Although whenever they’re looking for a little refreshment, they do both frequently head for port.

They also both tend to work a lot with brine.

And apparently, they both replace Legs with the same thing…

Bringing us to Peg, which has just set up in the space formerly occupied by a restaurant called Legs. It comes to us from the team behind P. Franco, which is also a celebrated Hackney wine bar & restaurant, and who have already opened another joint (Bright) to much fanfare and general hoo-hah.

This is their shot at a Japanese-style diner, inspired by a gloriously food-filled trip to Japan itself. It’s a small space, the kind you can see the entirety of standing from pretty much anywhere inside. The all-counter seating take place upon speckled white countertops which, as it turns out, are made from thousands of recycled yoghurt pots that have been compressed at some ludicrously high pressure into a glossy, smooth slab topped with jars of chopsticks. 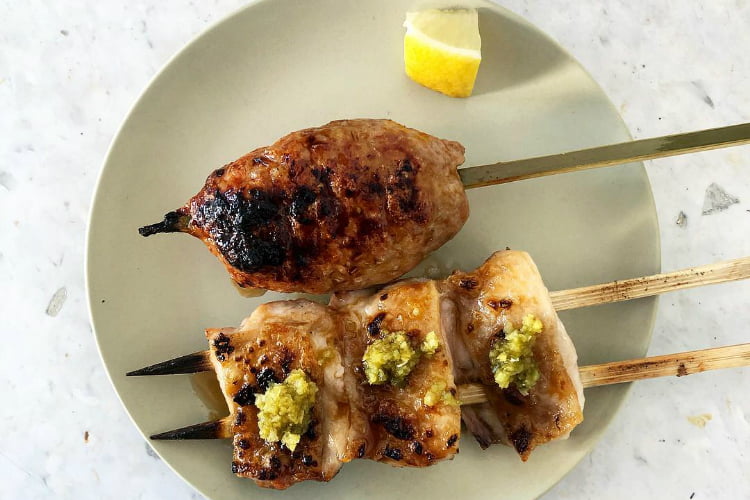 Below the peg-board menu there’s a small grill perpetually teasing you with the delicious smells that drift from it, as the chefs manning it skilfully scorch the contents of said menu. On it, you’ll find half a dozen skewers including chicken thighs, wings, and hearts, all of which have been thoroughly enlivened with Japanese seasonings like shichimi togarashi (a blend of chilli, orange peel, sesame, ginger, and Japanese pepper) and yuzu kosho, which is a kind of fermented citrus paste.

Next to those, you’ll find a few small plates including a smoked mackerel & barley broth; some fried tofu & green onion; and a few house ferments & pickles. The recommended move is for two people dining together to order literally everything on the menu, and to finish it with a portion of their amazake ice cream, which apparently people frequently misread as ‘amaze-cake’. It’s actually made using a leftover of the sake production process, and tastes quite sweet & rich.

Of course, coming from the team behind a wine bar there’s plenty of wine too, with around 150 bottles and a dozen or so well-curated (and reasonable) varieties by the glass. There’s also always a beer on tap, and you can also get a decent g&t. In fact, whatever you’re after…

…they’ve got you pegged.

NOTE: Peg is open now, from Wed-Sun. There are no bookings, and they don’t have a website at present, but you can find out more on their Instagram page right HERE.

Like the sound of this place? Then allow us to direct you to P. Franco.