Before we start, let’s go over some rules of thumb:

Sometimes, however, rules are less helpful. Or so Margot Henderson and Melanie Arnold would argue, who have opened a second Rochelle Canteen under their ethos of ‘no rules, and everything will be great’.

The follow up to their secluded (and decidedly delicious) Shoreditch gem, this branch is central, and doesn’t require you to find a doorbell hidden in a sort of hedge. Instead, it’s made its home in the extremely accessible Institute of Contemporary Arts, in a lofty, skylit space with an indoor garden, overlooking St James’s. 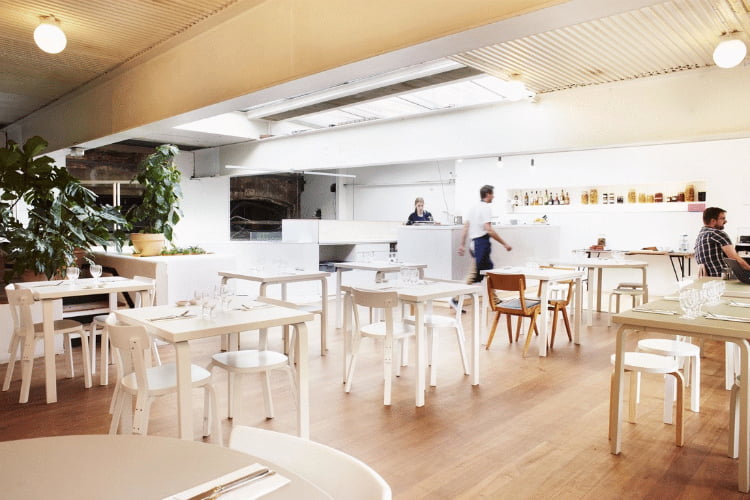 Open all day, it runs as a café, bar and restaurant. Melanie’s son, Fin Spiteri, looks after the succinct cocktail list (Negronis, Hanky Pankies); while in the kitchen, head chef Ben Coombs whips together dishes in the same unfussy, modern British vein as the original. So on your visit, you can expect dishes like braised cuttlefish and fennel, quail escabeche, and a pheasant and trotter pie – as well as an entire pig’s head to share. The menu does frequently change, however, taking loose inspiration from both the seasons and the current exhibition at the ICA.

In fact, an exhibit has now made its way actually into the restaurant. It’s called untitled 2019 (the form of the flower is unknown to the seed), and it looks uncannily like a pop up sake bar. The good news is that on Fridays, it actually is one. It’s a permanent installation by artist Rirkrit Tiravanija, and should you take a pew there, you’ll be able to sip sake cocktails and snack on a Japanese izakaya-inspired menu put together by Margot.

Which will always get a thumbs up.

NOTE: Rochelle Canteen at ICA is open Tues-Sun, 11am-11pm (midnight Fri & Sat) – you can find out more and book HERE.

Like combining dining with a gallery visit? Try the Whitechapel Refectory

A brand-new sibling for the brilliant wine-led restaurant...