For anyone on the seemingly never-ending hunt for authentic, flavour-filled Malaysian food in London…

…and re-laksa, at Sambal Shiok on North London’s Holloway Road.

Sambal Siok actually started out life as a street food stall, before progressing into a a pop-up restaurant. Then, due to on-going overwhelming demand, Lin decided to go permanent. She signed the lease on a space in Highbury, filled it with relaxed, cafe-esque furniture, and painted it the Malaysian flag’s primary red and blue. The kitchen’s open so you can watch the chefs at work wherever you are in the restaurant, otherwise, for the best view in the house, there’s a counter and a couple of stalls running the length of one side.

For the most part you’ll see them cooking up big, hearty bowls of Laksa (spicy noodle soup). A staple in Malaysian cuisine, there’s really no end to the types of Laksa one can make. However here Lin draws from the Peranakan curry laksa and the Assam laksa, from the north; which you can then top with a variety of different vegetables, poached chicken, or king prawns. They also do a vegan laksa which Yin has carefully perfected to include none of the shrimp and yet all of the umami flavour. 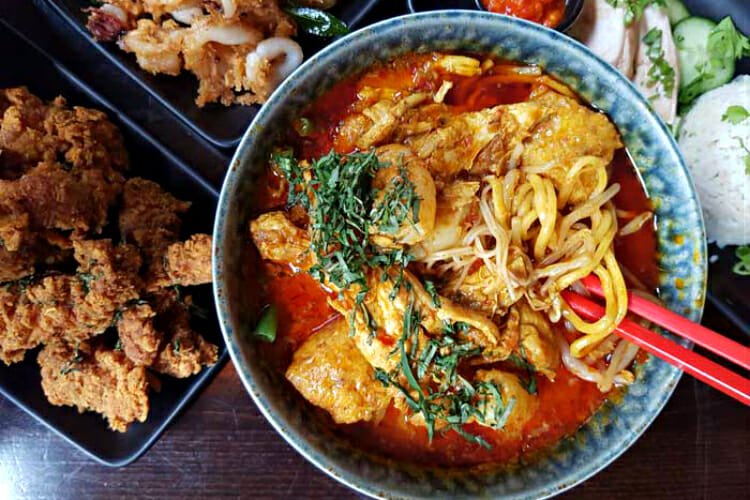 Beyond Laksa they also offer a couple of smaller snacks like their Malaysian fried chicken with peanut sauce; vegetable fritters; or sambal greens. Otherwise, if you’re after a different main entirely, there’s a number of rice dishes, influenced by the Chinese Fuzhou and Iban tribal communities in Sarawak (Borneo). Like their white chicken curry, made with lemongrass and coconut milk, also served with sweet cucumber and red onion pickles.

On Saturdays they also offer brunch which – alongside all of the above – includes big plates of nasi lemak, a typical Malay breakfast dish again, focused around coconut rice, with various vegetables, pickles, spices, as well as an egg of sorts, on the side.

Beats a bowl of corn flakes.