Stem & Glory is a vegan restaurant that first laid down roots in Cambridge. People loved it. It won a lot of awards. And when they decided to branch out and crowdfund a London location, it took them a whole six hours to hit their funding goal.

Now, they’ve decided that if it ain’t broke, don’t fix it. So they’re launching another London location this Autumn. In the same area. With the same crowdfunding model. And, probably with the same results.

The original was planted just off Barbican, while this new venue will be less than a kilometre away, overlooking Broadgate Circle. It’s looking like it’ll be quite a smart space too. It’s going to be set across two floors, with a slightly darker, moodier colour palette – One that leans a little more towards ‘date spot’ than ‘casual lunch place’ – all decorated with plenty of greenery both on and off the plate. 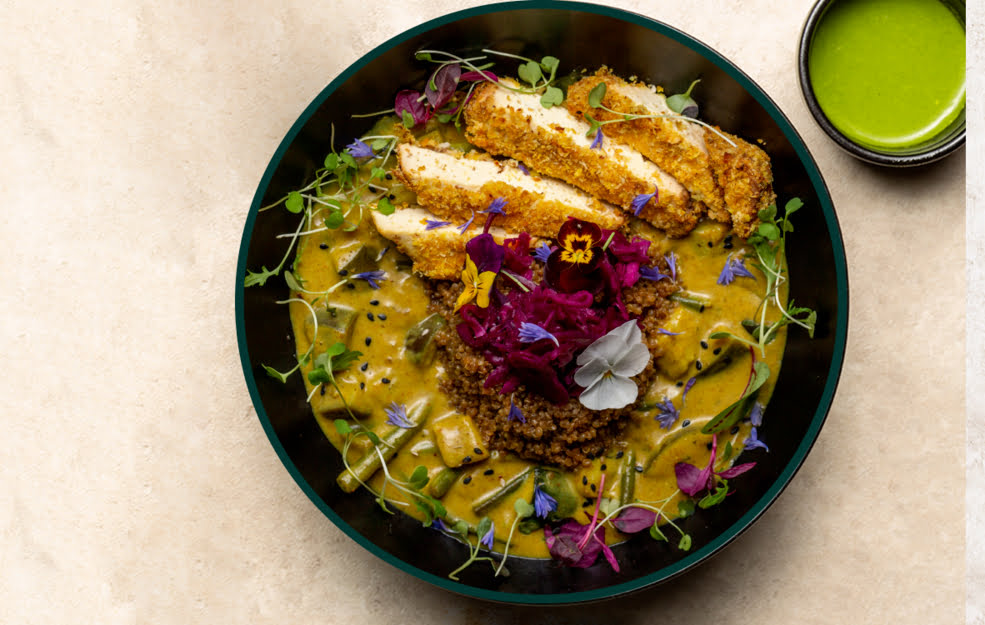 Speaking of, the menu will feature plant-based goodness including the likes of grilled king oyster “scallops” & artichoke hearts laid on a bed of cauliflower puree & annatto cream; or a Sri Lankan golden curry with fragrant black rice; and harissa grilled tofu steaks with a Moroccan stew and mint dressing.

Easing all that down will be their “extensive vegan bar”. And yes, it doesn’t sound like a massive leap to make a bar vegan. Oh no, we must somehow make do without the bacon-washed whiskey and the oyster gin. But apparently there’s more to it than that; a great deal of wines & beers are clarified using fish bladders, in a process that must have been absolutely bonkers to discover. So they’re building up a list of cocktails, beers, and wines completely free from our briny buddies.

And the cherry on top of all of this? Every time you get a meal there, they donate a meal to someone in need. And – bonus cherry – the restaurant isn’t just going to be carbon neutral, they’ve gone the extra step of becoming carbon negative.

Which is a very positive move.

NOTE: Stem & Glory Broadgate Circle is set to open in April. The crowdfunding campaign kicks off on January 10th, but you can sign up to ‘express an interest’, and get a heads up when it starts at their website right HERE.

Like plant-based food? Here are a few vegan friendly restaurants to when your appetite.