Unfortunately, it doesn’t mean someone else is paying.

But it does mean that you’re about to get one of the best-value omakase experiences in the city right now.

If you’ve not encountered that before, it’s a Japanese phrase meaning ‘I’ll leave it to you.’ It’s an ordering style that’s grown popular in sushi restaurants as a way of handing things over to the chef, who’ll in turn hand over to you his pick of what’s best that day. It’s a bit like a set menu, only it changes daily and you’ve no idea what to expect. And recently, there’s been a proliferation of omakase-only restaurants in London – except most of them are elaborate, three-hour long affairs that’ll – understandably – set you back a couple of hundred quid per person.

Sushi on Jones does things a little differently.

It’s come to London via New York, where they started out serving it up from a kiosk, on the street, with a 30 minute timeframe. It became an instant hit. And now they’ve brought that high-quality, low-pressure approach to Goods Way, the food, drink and music hub right by the canal in King’s Cross. 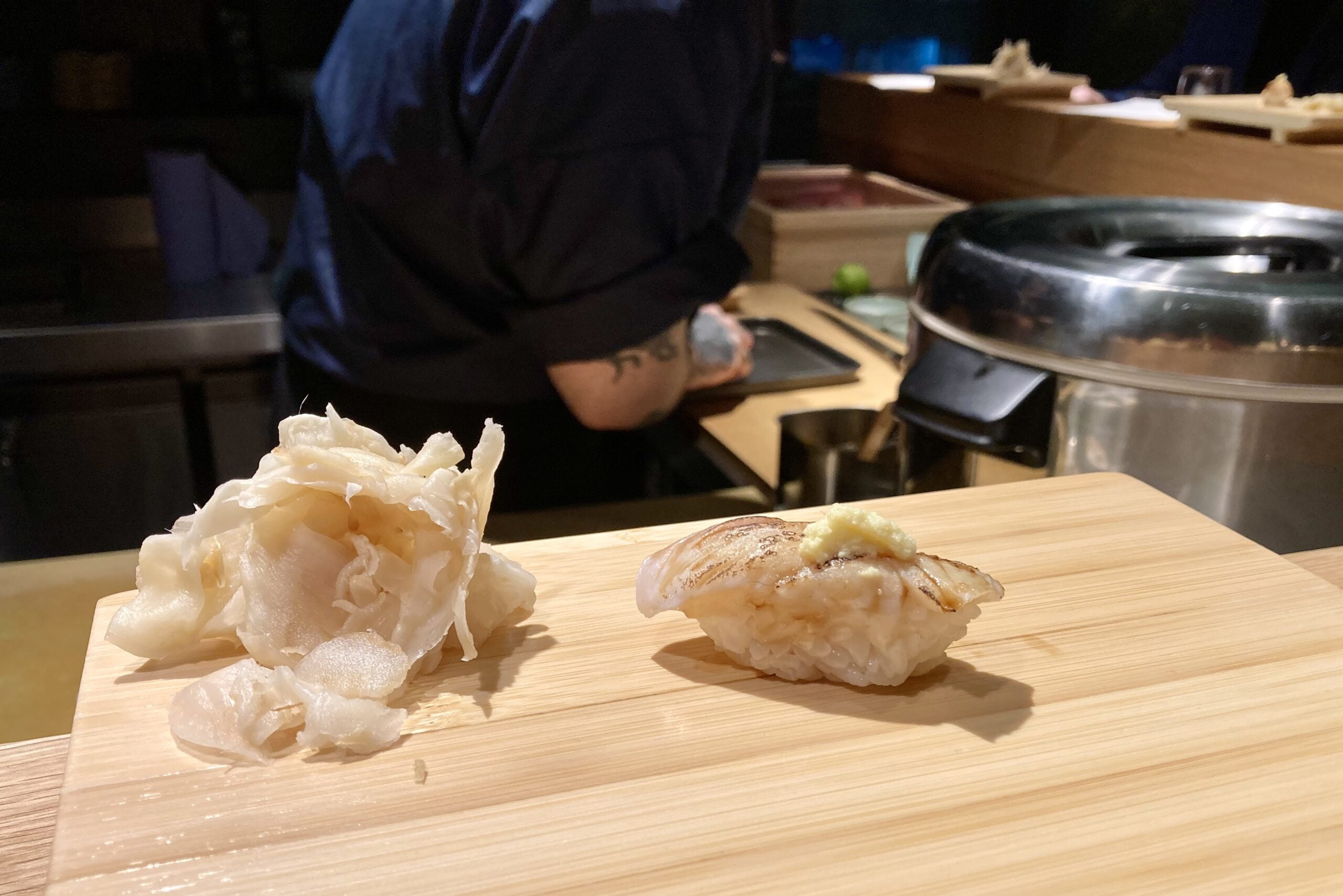 This incarnation is a little more upmarket than its predecessors across the pond, and is primo date territory. You’ll arrive in the New Orleans-styled indoor courtyard, make your way up the stairs at the back, and head towards a tiny, private corner of the mezzanine gallery. Up here, you get all the atmosphere of the rest of the place – the chatter, the music from the DJ booth opposite – but in an entirely intimate setting, with just eight stools perched around an L-shaped wooden counter and the open kitchen.

It’s here that two chefs in traditional itamae outfits calmly slice, season, and occasionally blowtorch the 12 pieces of sushi that make up the menu that evening. Head chef Mattia has been training in the craft since he was 16, and the quality of the fish is exceptional.

The charm lies in not knowing what to expect, but on our visit we were mostly served nigiri, where the fish is set on top of a small ingot of rice. We’re talking yellowtail with fresh shavings of truffle; the luxuriously textured botan ebi (wildspot prawn); and scorched Cornish black bream that sends smoky fragments zipping across your tastebuds. They’re creative here, too, pickling mackerel in-house with sugar, salt and vinegar for a sweeter flavour that’s picked up by the shiso leaf they slip between the fish and the rice. They cure their seabass in kombu (seaweed), and dust it in charcoal salt. Bluefin tuna is dry aged for two weeks for a meltingly soft texture. What makes it all the more remarkable is the fact that it’s all prepped, served and eaten within 45 minutes.

In between mouthfuls, the chefs will talk you through each dish, and give you recommendations for which sake or whisky to try next. It’s here that things can get a little pricier, although the house Tamanohikari sake (£12) was light and very drinkable; a great introduction to the genre if you’ve not had any before.

At under an hour, this isn’t a spot for a leisurely meal, or long conversations with your dining companion. It’s a heady, one-of-a-kind dining experience for foodies who want to get up close and personal with the process behind the dishes. And if you want to round out your evening with a few drinks, or even a little live music, Goods Way will duly oblige – or you can head over the canal to Coal Drops Yard.

We’ll leave that up to you.

NOTE: Sushi on Jones is open Weds-Sun evenings, plus lunch on weekends. The omakase experience costs £48pp – you can find out more, and book, here.

Love sushi? Check out our favourite sushi restaurants in London.