Calling yourself the Father of Tacos is pretty punchy.

Then again, Tacos Padre has earned it.

Founded by Nick Fitzgerald in 2017, TP started out as a pop-up food outfit, cooking at festivals like Meatopia and residencies around the world, including Berlin, Portugal and Mexico City (where, incidentally, he used to work – in the kitchens of the internationally renowned Pujol). Five years on, Nick’s landed a permanent taqueria where he and the team serve up dishes to go, from a stall in Borough Market’s street food village. 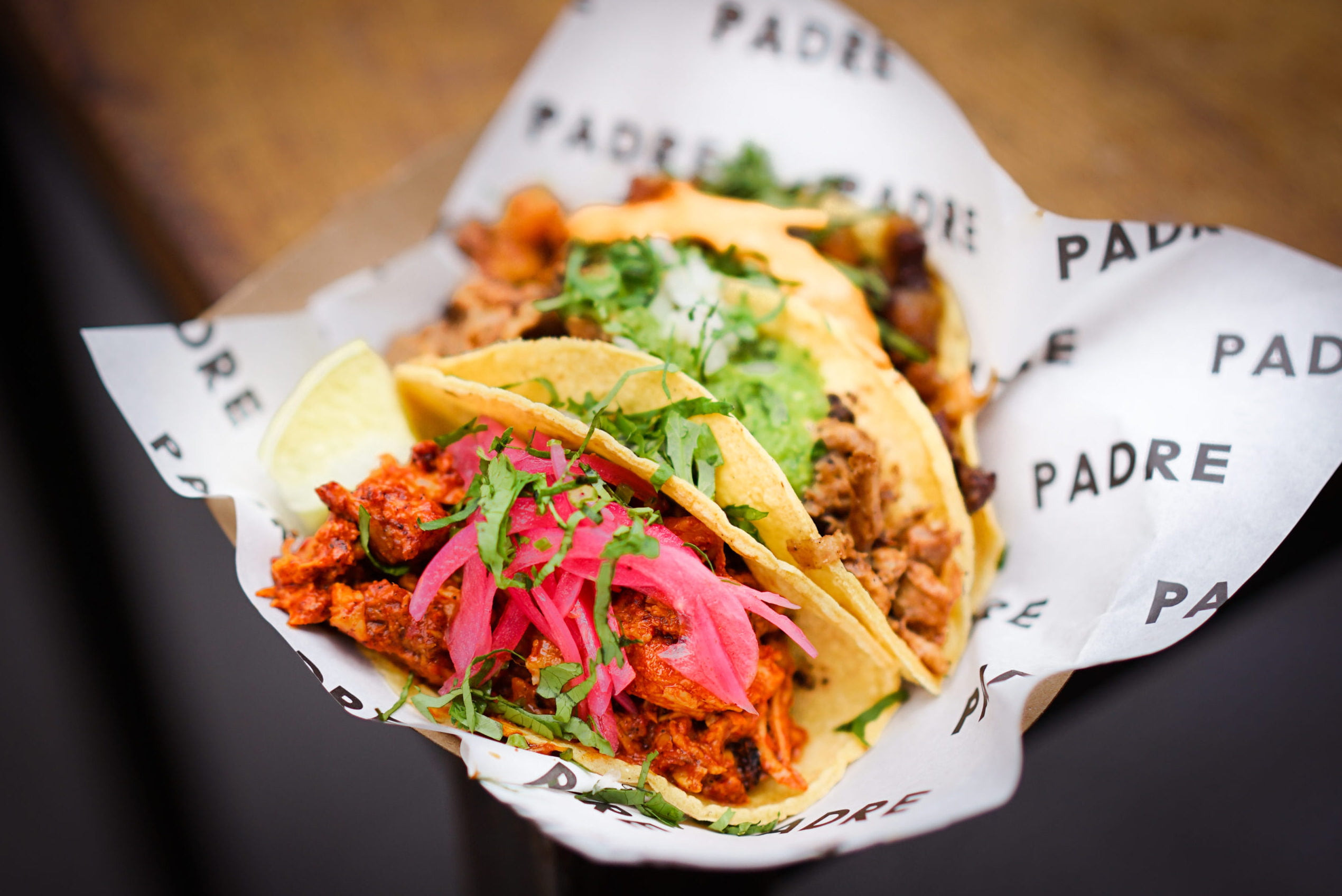 The secrets to Taco Padre’s success are twofold:

The meat that goes into their dishes doesn’t simply arrive in convenient little chunks. At the start of the week, whole carcasses are delivered to their Borough Market taqueria, where the team skilfully butcher them (ensuring as little as possible goes to waste), before marinading and slow-cooking the cuts for days on end. It goes without saying, of course, that all those rubs, sauces and marinades are made in-house, too (and luckily, you can buy a bottle or two to take away with you).

The taqueria’s open year-round to satisfy those lunchtime taco pangs, but the magic really happens over the warmer months. For it’s then that Taco Padre strings up the festoon lighting and sets out colourful tables, chairs and tropical greenery in the al fresco courtyard in front of the stall. It’s casual, punctuated occasionally by the rumble of trains overhead, but somehow supremely romantic. Branching out from the lunchtime menu, the evening pop up is a chance to take a deeper dive into Mexican cooking, inspired not only by Nick’s time at Pujol, but his extensive travels around Mexico. 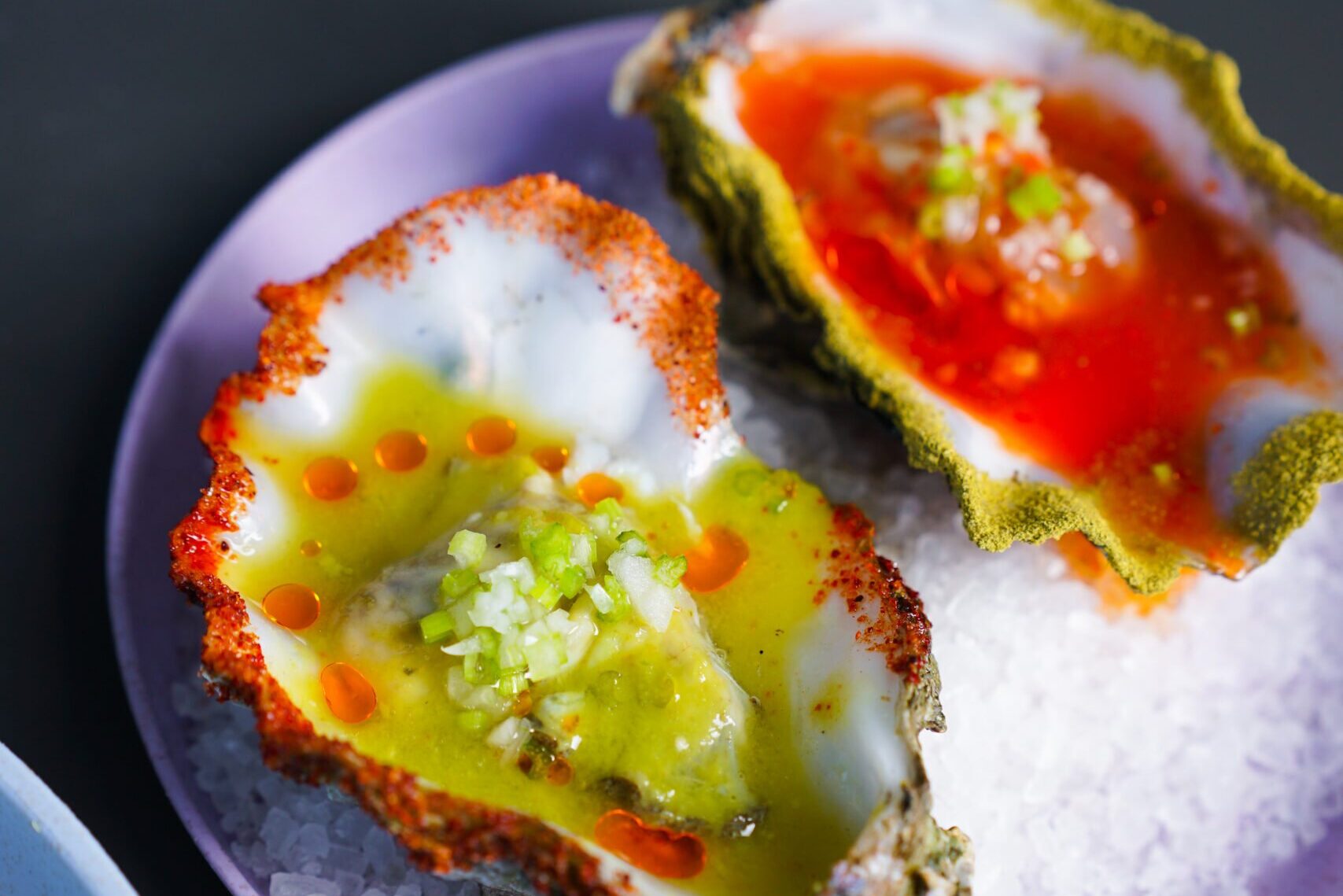 On the menu for their third season? Old favourites like the crab tostada with guajillo and tamarind; lamb chop with salsa borracha (‘drunk salsa’) and cucumber; and tacos al pastor with pickled pineapple… but also newness in the form of oysters divorciados (grilled over an open flame and slathered with chilli butter); roasted sweet potato flauta (or rolled-up taco), with black bean and mint purée; and gilt head bream, with shiso ceviche & courgette.

There are also bigger dishes to tackle as a group, like the confit pork chop cochinita with charred xni-pec (a heat-packing salsa from Yucatán), and for the veggies, smoked celeriac with an orange habanero glaze, served with a macadamia sikil pak, or dip.

You can cap it all off with a chocolate & mezcal soft serve; crisp buñuelos with caramel sauce; or a second look through the tequila and mezcal-soaked cocktail list, which spans from palomas and margaritas to the slushy-like mango & morita chile.

It’s the daddy of frozen cocktails.

NOTE: Tacos Padre is open for evening dining from Thursday – Saturday, starting on 5th May. You can find out more, and book a table, HERE.

Love dining out round Borough Market? Check out these other excellent London Bridge restaurants.