It’s the somewhat coincidentally vegan dining concept from ex-Chiltern Firehouse, Fat Duck and The Dairy chef Rishim Sachdeva, who came up with the idea after trying Veganuary as a self-professed ‘hardcore carnivore’. The result is an ever-evolving menu that’s deeply satisfying, brilliantly creative, and just so happens to be mostly vegan.

Since 2019 Tendril’s been popping up around the capital, including a breakout residency at Soho’s Sun & 13 Cantons which really drew crowds. No surprise, then, that Sachdeva’s already raised way beyond his crowdfunding target to find a permanent spot.

Until it beds in permanently, though, Tendril’s popping up just off Regent Street until start of next year (late January 2023), in the space formerly occupied by Mark Jarvis’ Stem.

It’s retained much of the old restaurant’s elegant trappings, with violet leather banquettes and a sleek, copper-topped bar. By day, sunshine pours in through the large windows at the front; by night the lights are dimmed and candles lit. Seating just 35, it’s an intimate setting, and Sachdeva himself will be on hand to talk you through many of the dishes personally. 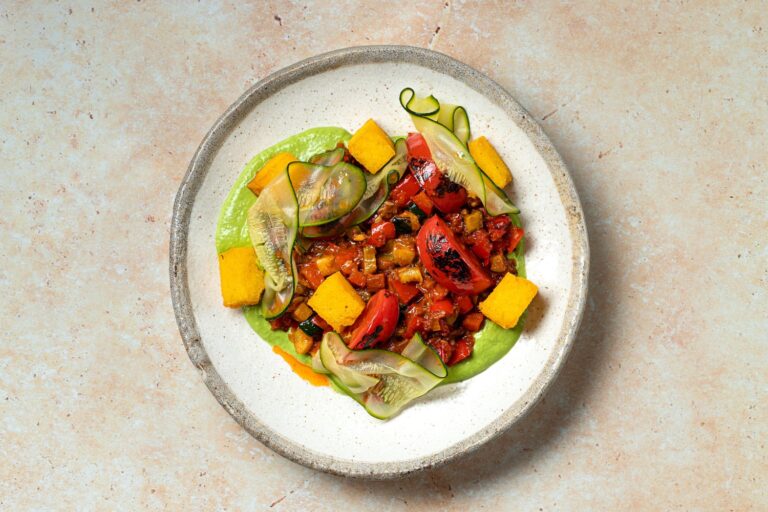 Which brings us to the food. The menu at Tendril feels like a glimpse of the future, championing plant-based dining in a way that’s not preachy, or trying to replace meat. Instead, vegetables are celebrated in their own right, lovingly brought together in dishes that are bursting with flavour (and seriously filling).

Taking inspiration from around the globe, menu highlights include the ratatouille studded with smoked tomatoes and crispy polenta on a smooth bed of bright green pea puree; the fresh, tapenade-laden blue corn tostada; tangy aubergine, scooped up with puff pastry boats; and plate of spiced muhammara adorned with pickled walnut and piquillo peppers, to be wiped clean with Coombshead Farm bread. And if you’re not a full-time vegan, don’t skip the sublimely indulgent baked brie with honey and truffle mascarpone on sourdough.

This is also the first Tendril pop-up where Rishim and his team can run their own bar, so there’s a lovely drinks list to accompany it all, ranging from (mostly) vegan wines to refreshing spritz cocktails.

Can’t decide what to go for? Plump for the six-course Discovery Menu which costs, uh – yeah, £39pp.

Which is a nice discovery.

NOTE: Tendril will be popping up in Mayfair until around the end of January 2023. Bookings can be made right HERE.

Looking for a nightcap spot? Check out the Best Bars in Mayfair

All My Friends A three-month pop up bringing together music, street food, a bar and a record store….

God’s Garden A hideout bar set in the courtyard of One Marylebone Church….

Adejoké Bakare at Quality Wines We have a sneaky suspicion that this might be alright.