France has fallen to the Germans, and Charles de Gaulle – the leader of what’s left of it – is sitting in a pub in Soho. He’s writing one of the most important speeches in French history; “To All Frenchmen”. It’s the speech that will light the fire behind La Résistance, and will prove that his nation will never be defeated.

In fact, such was his ferocious patriotic pride that he inadvertently turned that particular pub in Soho into a small part of France forevermore. Back then it was called The York Minister. Now it’s called The French House, and stepping inside you’d be forgiven for thinking you’d slipped, tripped, and accidentally stumbled into a cross-channel spacetime portal.

It’s small, but convivial. It seems as if everything’s made out of wood. There’s no music, unless you count the hum of conversation, and phones are strictly interdit. They refuse to serve pints (you can get a half though). They pour more Pernod than anywhere else in the country (to clarify, that’s England). They specialise in oaky, Breton cider, Gallic wine, and champagne. The small wooden bar is surrounded by black & white photos spanning several eras, and the upstairs Dining Room is about the size of, well, a dining room. 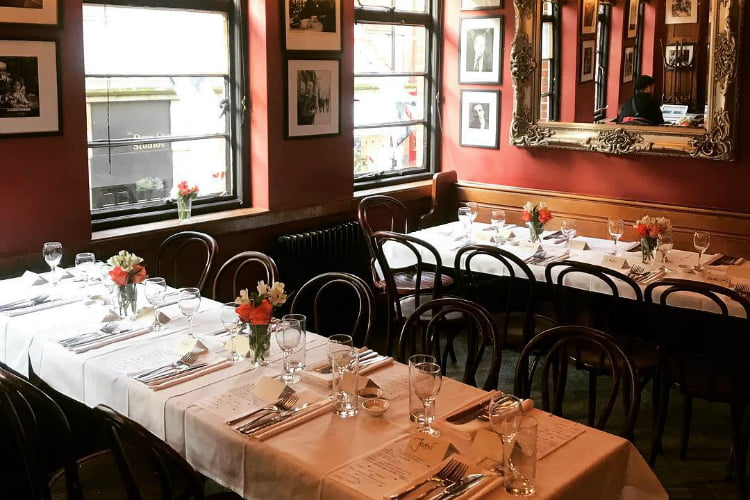 And it’s here that Neil Borthwick is serving up some remarkable food. He’s husband of cafe Murano’s Angela Hartnett, and has had stints at places like The Merchant’s Tavern (which they co-owned) and The Square. Here, he’s elected to create an appropriately Gallic-leaning menu that still pays tribute to the country we’re actually in.

The starters range from Carlingford oysters, to salt cod beignets, to an entire head of confit garlic with goats curd on toast. The larger offerings change regularly, but include the likes of a sea bream with braised fennel, or a roast pork chop with turnip tops. And for dessert? Just in case you thought the dishes weren’t quite French enough, you can get a delicate choux pastry filled with praline cream & covered in chocolate sauce.

NOTE: The French House is open for lunch and dinner all week. You can find out more and make a booking (email here or call 020 7437 2477) at their website right HERE.

Like French restaurants with aggressively French names? Then you miiiiight want to check out Frenchie.