According to The Stafford Hotel, its newly refurbed restaurant is “a contemporary tale about relaxed, informal dining”.

And if this tale had a prequel, it would be the story of a prodigious young chef by the name of James Durrant, who moved to London in his twenties only to land a slew of phenomenal jobs, starting with the three Michelin-starred Restaurant Gordon Ramsay, followed by the three Michelin-starred Juniper in Altrincham, another stint with Gordon, a head chef post at Maze, an executive chef post at Maze, and finally earning a Michelin Bib Gourmand for his first venture, The Plough Inn in Hampshire.

So it’s fair to say, the main story has been a long time coming.

And here it is: James is now taking over the Stafford’s restaurant, now going under the name of “The Game Bird” – apparently not just in a nod to its game-focussed menu, but a particularly gutsy WW2 spy who once stayed at the hotel, Nancy Wake. The space itself has had a complete reboot to reflect the hotel’s heritage, with sky blue walls and intimate dining booths that give the sense of a private members’ club.

A members’ club devoted to meat. 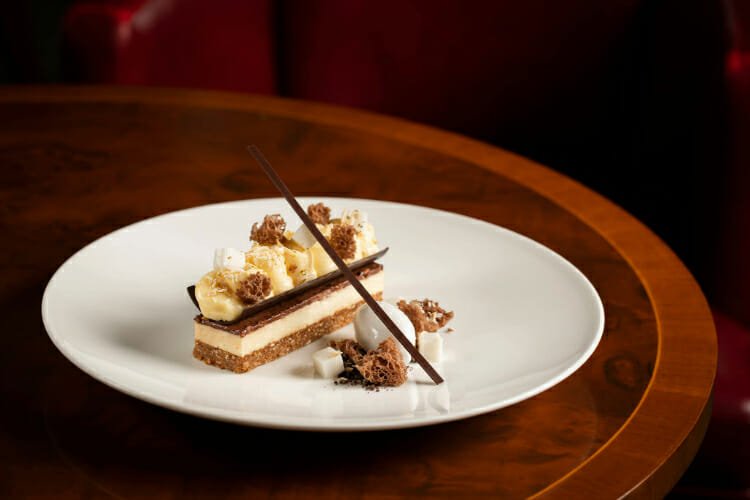 It comes in all forms here, from roast pigeon to grilled cote de boeuf, steak and ale steamed suet pudding to fallow deer tartare. But there’s plenty for non-meat eaters too, with coal-cooked celeriac with walnuts and apple and white onion and parsley risotto on the menu, as well as a dedicated oyster section and a tableside trolley plating up caviar and cured and smoked meats.

All of which, paired with a trip to the Champagne bar, should make for a very happy ending.

NOTE: The Game Bird is now open, daily. You can make a reservation through their website HERE.

If you’re big on British…you’ll probably like Lupins too.