As is a solid brunch. So it’s helpful that The Good Egg have hatched their first permanent home – in an old Ladbrokes in Stoke Newington.

As has keeping their own good eggs, including ex-Ottolenghi baker Oded Mizrachi. And like their staff, the menu’s migrated over the years, and you don’t trot the globe without soaking up some of the local flavour, so expect Levantine cuisine with hints of Montreal, Tel-Aviv and New York – which also inspired the interior. Whitewashed walls, shelves with jars of pickling lemons, and a breakfast bar loaded with freshly made babka combine for a cool, crisp slice of big apple.

As you gather with friends on the wooden banquettes you’ll have a choice to make:

There’s plenty of options “for the table” and, once it’s had its fill, you can enjoy what’s left of cornbread, zhoug and honey butter, house labneh with lemon & chilli relish, or morning baharat buns, to name but a few. You can then crack on to larger plates like parsnip and potato kugel with smoked trout, egg and bacon pita with date jam and mango, or manoushi with ajvar (pepper oil), pumpkin and fried egg. 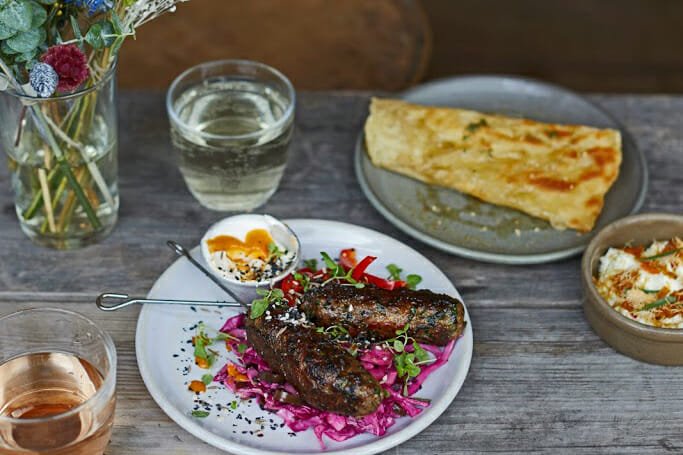 Everything’s up for grabs in their sharing menu. You can divvy up braised octopus with pink fir potatoes, honey and apricot glazed lamb ribs, flat iron steak with pomegranate chimichurri, and za’atar fried chicken. Herbivores are also catered for with dishes including baharat spiced roast pumpkin and the aggressively named smacked cucumber with miso and chickpeas.

To wash it all down there’s craft beer, prosecco, juice, even orange wine – basically, all you need to survive the morning after. Or, if you’re ready to start again, then kick things off with a pickleback – a bourbon shot with a pickled brine chaser.

Details: The Good Egg is open Monday 9am-5pm; Tuesday-Friday 9am-11pm; Saturday & Sunday 10am-11pm. (The kitchen closes between 3.30pm-6pm each day when a snack menu & drinks are available.) To find out more, and book, head HERE.

1771 Mark Jarvis has a new restaurant, and it’s serving tasting menus only….