The London Shell Co.’s latest boat has finally made its way down the birth canal.

It’s called The Grand Duchess, and it’s a romantic, regal old barge permanently moored on the Grand Union Canal at Paddington Central right next to the company’s first floating restaurant, The Prince Regent (which will still be cruising up and down the water).

And sure, she doesn’t move, but she more than makes up for it with sheer space. You’ll step aboard through a starboard-side doorway crested with metallic waves and descend into the hull. Inside, thanks to the fact that the bulk of the vessel is below the waterline, you’ll find a Tardis-like optical illusion, with considerably more space than there seems to be from the outside. It’s lined on one side by tables, and on the other by bar seating facing out to the water itself.

All in all, it fits around 40 diners at a time, with a few spilling out onto the banks of the canal during the warmer parts of the year. And up at the bow of the ship, you’ll find The Captain’s Table; a banqueting space set aside for private dining. 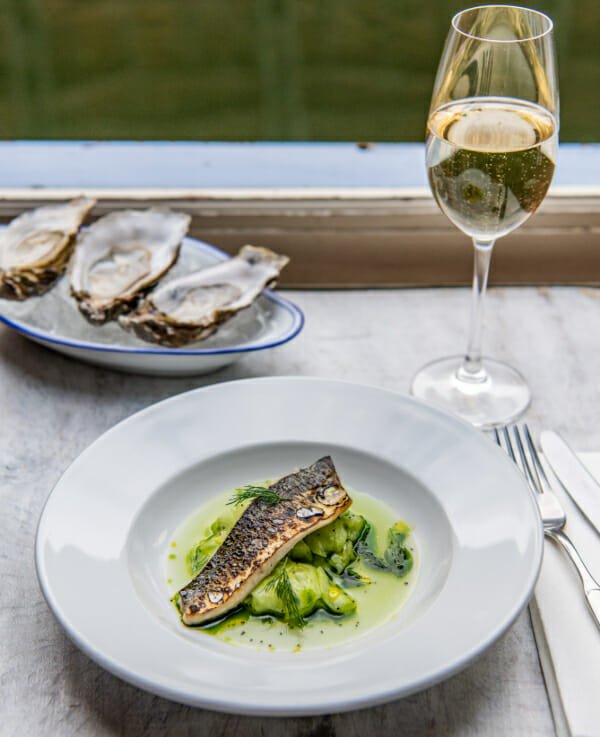 The menu is – shocker – quite seafood-led with over 90% of their fish coming in daily from a few key suppliers in Cornwall. Those fresh swimmers go into dishes like beer-battered lobster with fried curry leaves; pepper-cured turbot with cucumber & grapefruit; and a huge surf ‘n’ turf packing 500g of Dexter rib together with grilled Langoustines in garlic butter. And on Sundays, there’s an elevated roast on offer, with meat and seafood options, and a little live music, too.

Because the best wines that go with fish are traditionally whites, and the best whites are traditionally sparkling, they’re offering over 50 bottles of bubbly on their pretty extensive list. And in keeping with the list aboard The Prince Regent, there’ll be plenty from small producers and undervalued regions, too. If wine’s not your bag? There’s a short cocktail menu to fill the gap…

…if you fancy something on the rocks.

NOTE: The Grand Duchess is open daily for lunch and dinner. You can make a booking, and find out more, at their website right HERE.

Like floating restaurants? It just so happens Darcie & May Green are just down the canal…