Fun fact: the GPS on your phone has a deliberate 2% inaccuracy built into it.

It’s to prevent you from using your iPhone to launch a cruise missile. And normally, it’s not a problem, unless you’re A) Kim Jong Un, or B) trying to find The Libertine.

Located in the vaults of the historic Royal Exchange Building, it confuses GPS to say the least. Go into the West entrance of Royal Exchange, nope. North entrance? Nope. East entrance? Close. Basically, you need to go along the East side of the Royal Exchange building as if you’re going to the Statue of James Henry Greathead and then voila, The Libertine…

…is in the subterranean vaults right below your feet.

It’s from the people behind rooftop hangouts Pergola Paddington & Pergola on the Wharf (who apparently have some deep seated hatred of the ground floor for some reason) and from the outside it looks a bit like a fancy, boutique shop. Step inside and it actually smells like one too with floral notes wafting around the venue – it’s wonderful. The entrance level is head-to-toe British racing green decked out with antique-style paintings. Head down the spiral stairs and you’ll be met with two huge – and we do mean huge – 16th century open-brick dome dining and drinking areas which can serve up to a whopping 450 people.

The first vault is dressed up with tiny checked tiled flooring, mahogany wooden booths, and crimson, amber, and marmalade velvet bar stools. There’s a large bar with an elaborate, domed, dark bronze shelf stretching the length of the bar, and the underneath is decorated with emerald and coral tiles. The dining room is full of rich green upholstered booths, backdropped by sundial lights, while the entire room is lit by circular retro skylights wrapped in vines.

On the food front, it’s a very safe menu. You can expect staple dishes like hearty steaks, fish & chips, and braised lamb shank with fluffy mash potato, but served up a bit fancier, and to a genuinely good standard. If you’re after dishes that break boundaries, or pop with spice, this probably isn’t the place for you. But, if you fancy classic, great food, then you’re in for a treat.

Aside from the food, they’ve got a genuinely great cocktail list, along with your ever-desired wines & beers and a huge selection of gins from London’s many top-tier distilleries. Believe it or not, The Royal Exchange was the first place that was actually fully licensed & allowed to sell alcohol back in 1571, by Queen Elizabeth I. And originally, stockbrokers were banned because of their reputation for being rude. How times have changed. 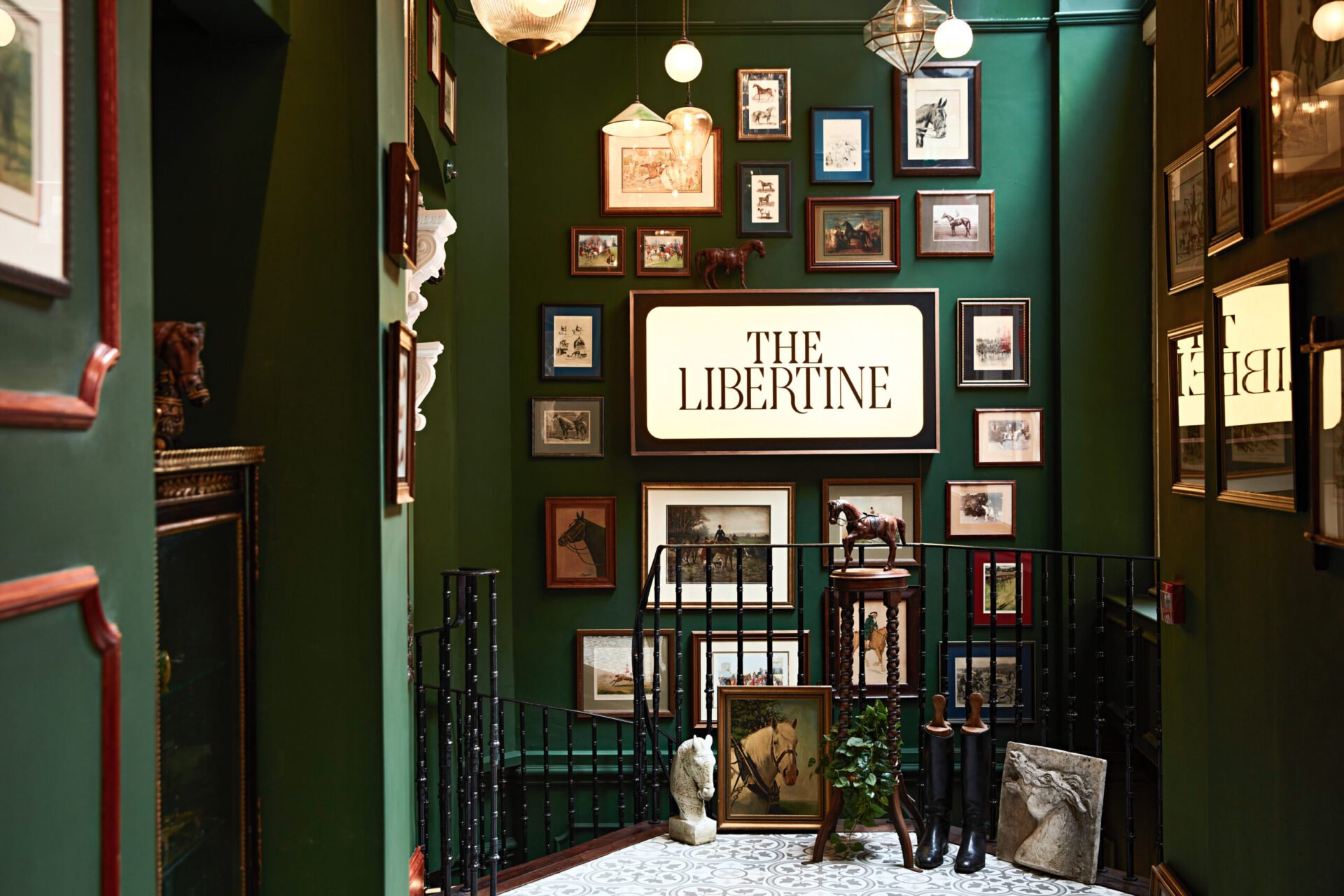 The Libertine caters to all, it’s posh, but not too posh, it’s not trying to be edgy, or go mad with experimentation. It’s the perfect place to impress a client, or grab dinner if you’re working late in the city.

And to top it all off, tucked away in this underground restaurant is a whiskey vault for paired whiskey experiences.

So, despite playing it safe, it is a little whisky.

NOTE: The Libertine is now open Monday to Friday for lunch, dinner and drinks. You can make a reservation right here.

After work dinner sorted, how about drinks? You’ll want to have a peep at the best bars in the City…