There are now enough Soho Houses to make a small, phenomenally wealthy village. And yet The Ned – a hotel & restaurant hub in the City – might just be bigger than the entire thing.

Taking over the Grade I listed former Midland Bank building by Bank station (designed by architect Edward ‘Ned’ Lutyens), The Ned takes up a whopping 320,000 sq ft, packing in seven (yes, seven) restaurants, a bar, two swimming pools (on the roof and indoors), a gym, a Cowshed spa, and over 250 plush bedrooms.

And the insanity doesn’t end there – there’s also a members club set on both the rooftop and in the basement in the original bank vault, which featured in Goldfinger as the setting for Fort Knox. Of course, Fort Knox is probably easier to get into, seeing as they’re running a totally separate membership scheme to Soho House.

Luckily, there’s plenty to see as a punter too, so behold –  your ultimate guide to The Ned London.

RESTAURANTS AT THE NED

On entering The Ned off Poultry, you’ll be ushered through the revolving doors by a pair of smartly turned out doormen into the grand, ground floor. Clad floor to ceiling in marble and African verdite (a forest green stone), it’s an awesome sight, with lofty, cathedral-like ceilings, a domed skylight, and huge, double-height windows. There’s a host of original features restored from its previous life as the main banking hall – one of Lutyens’ descendants was even drafted in to recreate the original lighting, and to the right as you enter, you can spot the chairman’s old private elevator.

Besides a central bandstand (which, depending on time of day, might be playing host to a live acoustic set or a jazz quartet), this floor is given over to The Ned’s many restaurants and bars. Here’s the lowdown…
– 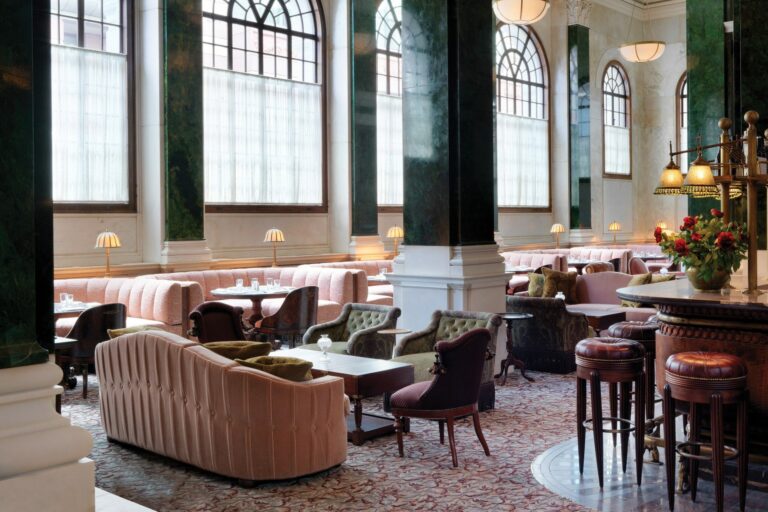 Directly to your left as you enter, Millie’s Lounge is a quaintly chintzy setting specialising in British classics – so you’ll find everything from kedgeree for breakfast through to pork chops with apple sauce for dinner, all served alongside English sparkling wines and craft ales. Offsetting those emerald columns with pink scalloped banquettes, it makes the perfect setting for their quintessential Afternoon Tea, with complimentary refills of sandwiches and tea.
– 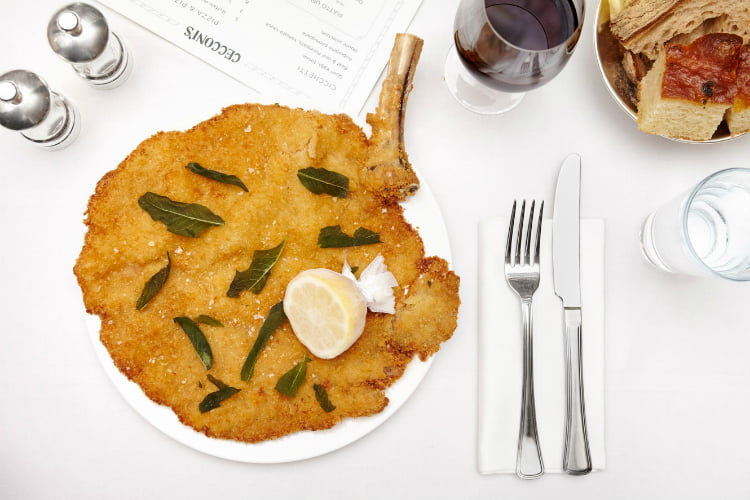 And to your right, you’ll find the deeper-hued Cecconi’s, a City outpost of the group’s Italian restaurant, open until midnight most nights of the week. Set around a striking central bar, you’ll find polished wood tables and chintzy seating, perfect for sinking into to feast on tonnarelli cacio e pepe; sea bream carpaccio with baby mint; and this ludicrously sized veal Milanese. Aperitivi are served every weekday before 5pm, and on Sundays you can book in for a decadent feast, with all-you-can-eat pasta dishes, salads, lobster, oysters, Sunday roasts and Italian desserts for £90pp.
– 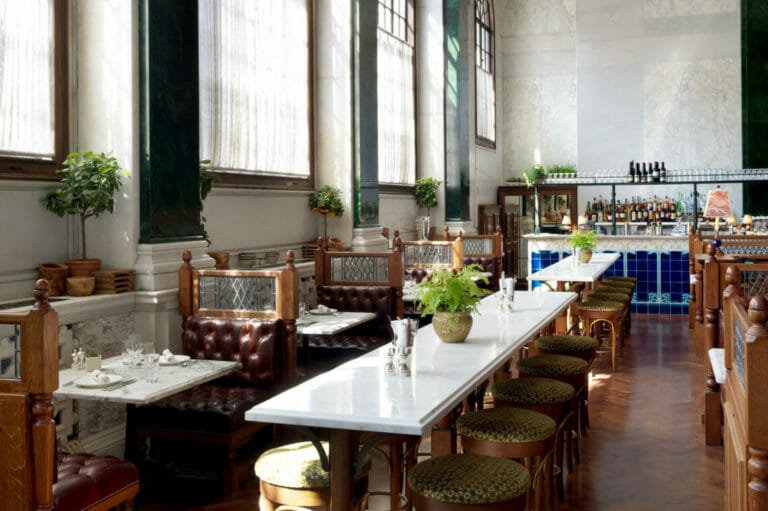 The day after indulging at Cecconi’s Feast, you may wish to visit Malibu Kitchen, which – unsurprisingly – specialises in Californian nosh, catering to the health-conscious with superfood brunches, raw and vegan dishes, cured fish and meat, and tacos for emergency carb-loading.
– 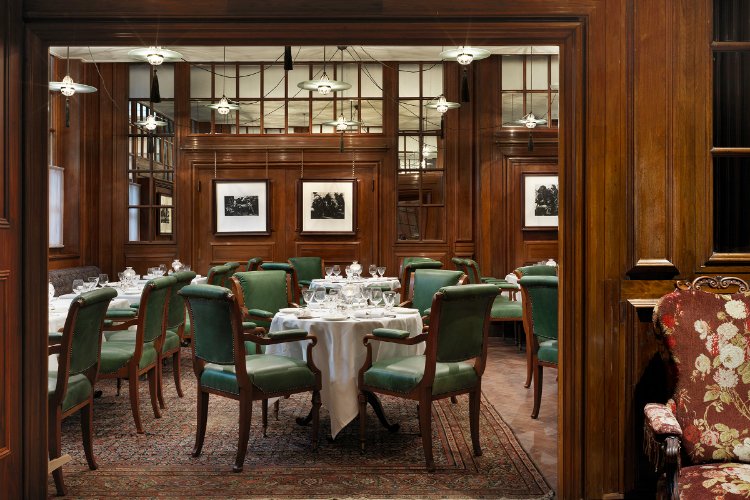 Housed in the former bank manager’s office, this sumptuous wood-panelled dining room is dedicated to the grill. You’ll be able to see the menu working its way round the space, as almost everything is served from an old fashioned trolley, with fish filleted table-side and cocktails poured before your eyes…
– 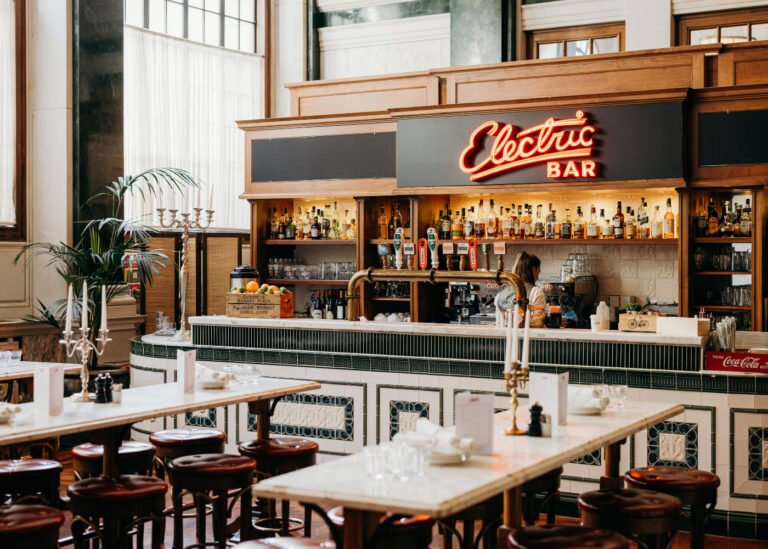 The East London outpost of Notting Hill’s Electric Diner, pairing neon signage with traditional counters and silver candlesticks. Tucked at the back of the galleried East wing of the old banking hall, it serves deli standards like smoked fish, bagels, Reubens, and cheesecake from a by-the-slice dessert counter. The brunch includes a Full American Breakfast; an ode to NYC’s Jewish delis with latkes, pastrami ‘bacon’ and cholent (stew).
– 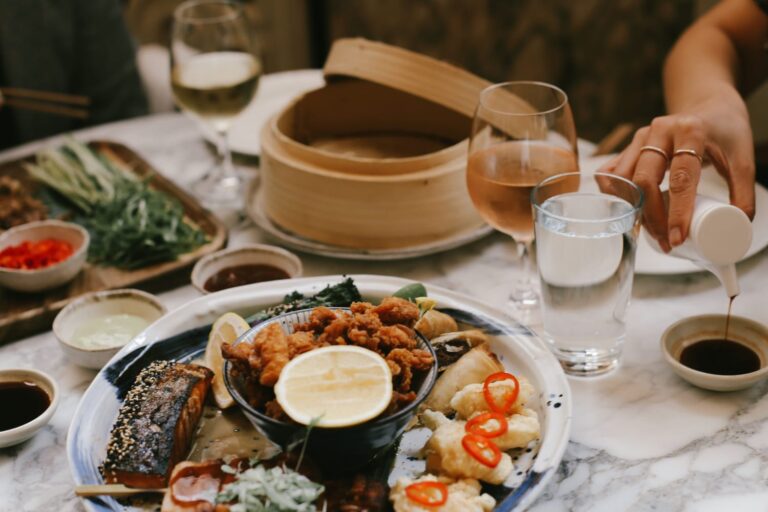 Commanding a long stretch of marble dining counter is Kaia, The Ned’s Asian-Pacific inspired eatery serving up poke bowls, sushi, and robata-grilled mains alongside sake and cocktails. The omakase platters are a good choice whether you’re just after a snack or a full-blown meal, and they offer some of the most interesting vegan ‘sushi’ in the city.
– 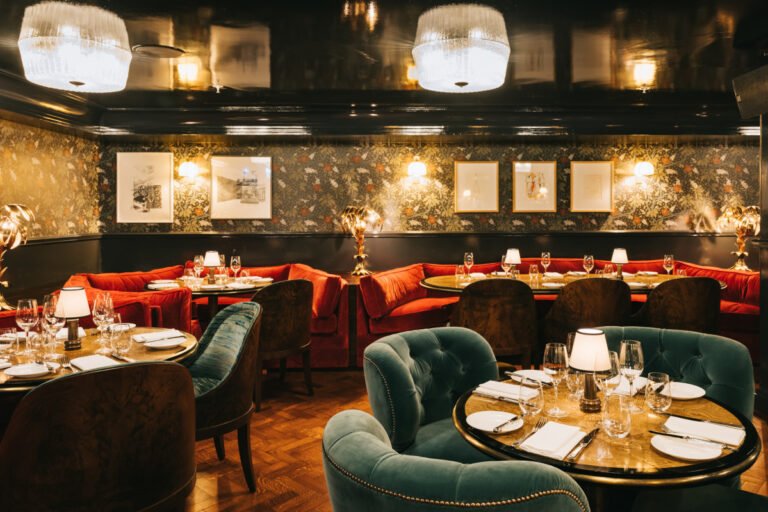 A subterranean velvet-trimmed cavern of decadence, with nightly live music; a menu of indulgent dishes from caviar and lobster thermidor to USDA prime beef and baked alaskas to share; plus a breathtaking cabaret show on Saturday nights curated by the inimitable Black Cat Cabaret, starring comedians, singers and burlesque performers.
– 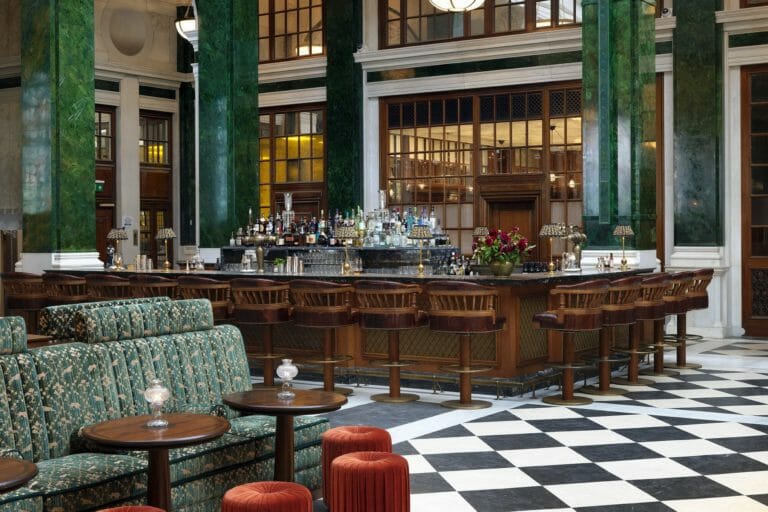 Last but not least is The Ned’s ground-floor bar. Just next to the bandstand, The Nickel Bar is a suave, walnut island bar manned by suited barkeeps shaking up classic cocktails from morning till, well, early morning again. You’ll find American snacks (like pastrami cheese fries; salt beef sliders; and devilled eggs) and breakfast bar dishes to soak up numbers like the Double Nut Old Fashioned; made with Wild Turkey whisky, peanut butter, pecan, Mozart dark chocolate liqueur and aromatic bitters. Next to the bar, the Nickel Stage sees a daily line-up of musicians serenade you with everything from live jazz to brand new music.
–

And so, to the main event: the 250 stylish bedrooms packed into The Ned’s six residential storeys. They vary in size, from petits boudoirs to grandiose suites, and all score you access to the private bar in the basement vaults. Here’s what a stay at The Ned entails…
– 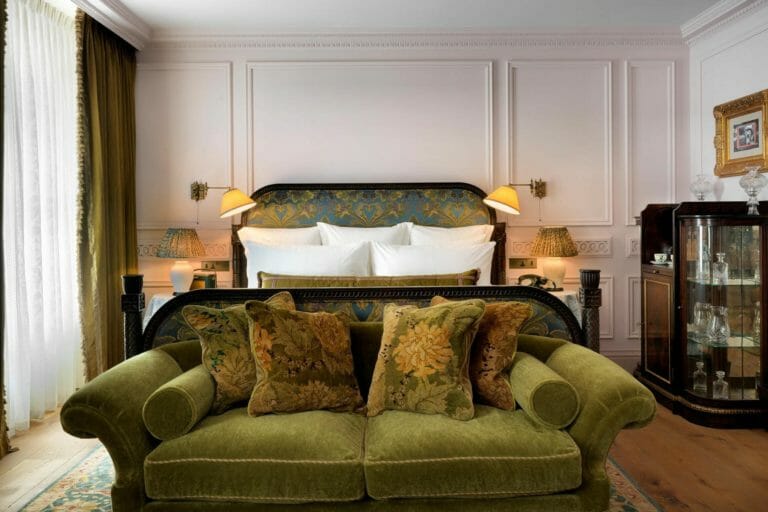 Drawing inspiration from the 1920s architecture, the bedrooms at The Ned are styled with a heavy dose of smoothly curving jazz age furnishings. Smaller rooms are kitted out with elegant wrought-iron or walnut, art deco beds; velvet armchairs and glorious rainforest showers (with Cowshed products, of course). 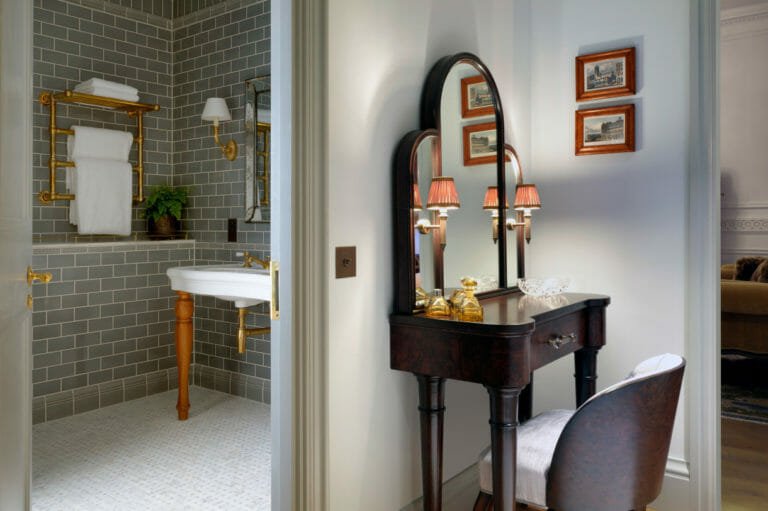 Scaling up, The Ned’s larger rooms promise grand four-poster or canopy super king-sized beds; panelled walls; minibars in vintage drinks consoles; and giant bathtubs that belong in stately homes. The suites, of course, are on another level entirely – quite literally in the case of the duplex, which has an original wooden spiral staircase in its midst. But both the larger rooms and the suites will also net you entry to the most exclusive part of the hotel…
– 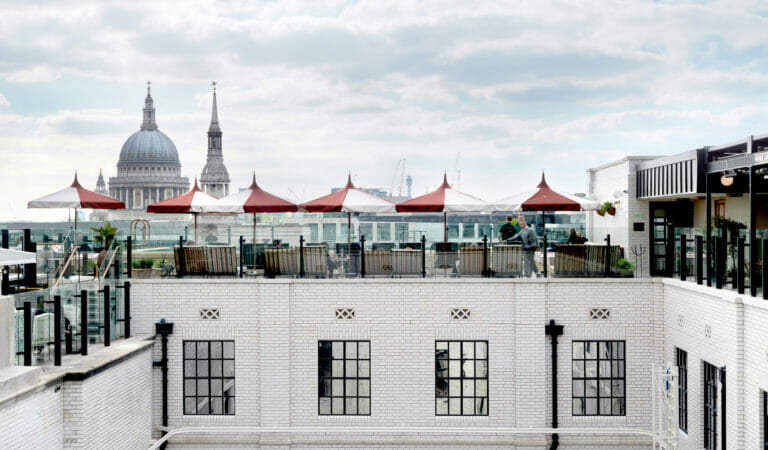 An unusual space winding around the sides of the building, The Ned’s rooftop is open only to Ned’s Club members and hotel guests in the larger rooms. Here, you’ll find cocktail bars, two more restaurants with al fresco terraces (that can be covered and heated in cooler months), and a heated rooftop pool overlooking St. Paul’s Cathedral. Not too shabby.

The counterpart to Ned’s Club Upstairs is Ned’s Club Downstairs, which you’ll find in…
– 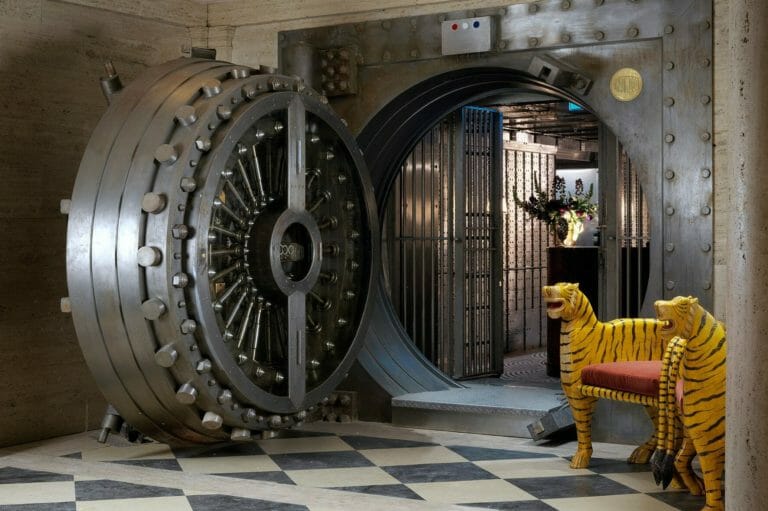 This mother is the entrance to The Ned’s Vault Bar & Lounge, set in the original bank strongroom behind a twenty-tonne, two metre-wide door. Inside, walls are lined with 3,000 original safety deposit boxes, while the space gets some home comforts in the form of velvety sofas, cocktails, DJs, live music and a late-night Italian menu. Just be aware that a lock-in in this bar could turn out to be quite a serious affair.
– 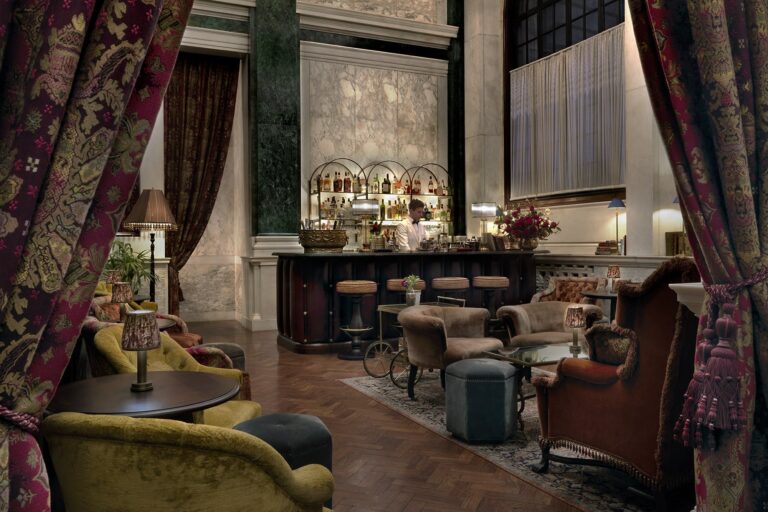 An intimate snug hidden away from the hubbub of the main hall, the close-quartered Library Bar boasts walls covered with antique books; decadent velvet armchairs; and a martini trolley that’s wheeled from table to table. And if martinis aren’t for you, there’s a library of classic cocktails made with aged spirits, rare cognacs and vintage Champagnes to pick from, too.
– 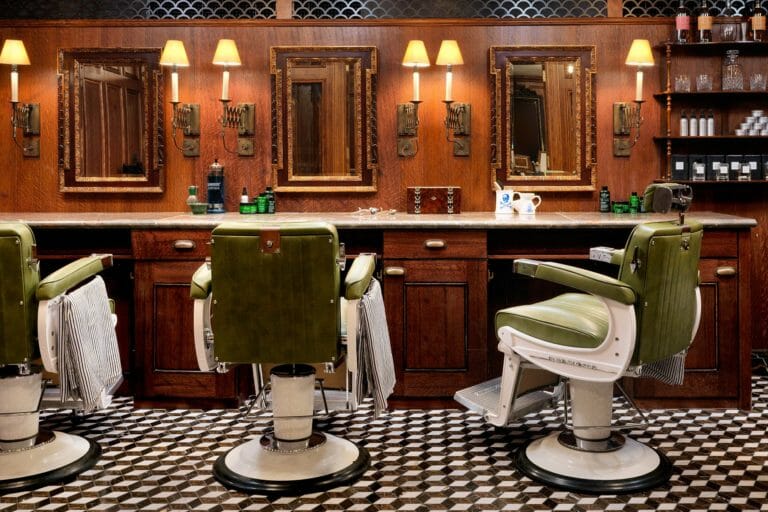 Also in the underbelly of The Ned are the plush amenities for hotel guests and members, as well as the public if they spend over £400 on treatments… namely a gentlemen’s barbershop, lined with wood-panelled walls and Victorian fittings; a hair parlour; a manicure room; a swimming pool enclosed by verdite pillars echoing the ground floor lobby; a gym; steam room; a sauna; a Cowshed spa offering facials and massages; and a marble-clad, traditional Moroccan hammam.

Which, finally, brings us to the ned. Sorry, end.

NOTE: The Ned is open daily. You can find out more, make restaurant or room reservations, and apply for membership at their website right HERE.